Despite Excellence of Acting Ensemble Hamlet Fails at Seattle Shakes 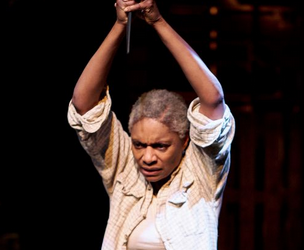 The extraordinary collaboration of Miles Davis and John Coltrane yielded treasures of 20th century jazz. Their mastery left us tapestries of music storytelling, requiring close, imaginative listening. The works of Wm. Shakespeare, not quite four centuries prior, also need this kind of thoughtful listening. The structure of the language, seemingly odd and impenetrable at first, needs patience, and for the listener to “lean in” to the worlds the words evoke. The Great Works of Miles/’Trane and the Works of Shakespeare–in the mouths of strong players–will reward the audience who is willing to be an active listener.

If a director or sound designer chooses to use one work of genius as a background the other, this writer would suggest that they have not listened intently enough to either work of art. And yet that’s what director Juan A Mas chooses to do in Seattle Shakespeare’s production of Hamlet, currently running in repertory with As You Like It, through March 13. The result is a chaotic mess of sounds, and inside a choppy 2-hour editing job, the story of the sweet and tragic prince was nearly impossible to track. My companion had never seen Hamlet, and though I have seen several productions, both of us were lost.

This was a joyous reopening of one of Seattle’s most important theatres. Struggling through two years of Covid’s grip on public gatherings, Seattle Shakespeare’s staff, board, and public supporters have worked tenaciously to keep the theatre viable. With tears, Artistic Director George Mount and Managing Director John Bradshaw expressed gratitude, relief and love for all those people who’ve stood behind Seattle Shakespeare during these difficult times. It was a lengthy but important curtain speech. We were all happy to be together.

Every single member of the acting company is accomplished, dexterous, even beautiful, in physicality, largely able with the challenge of Shakespeare’s language, and working together the best they can as an ensemble. The company is cast against gender and age in many regards, and the rainbow of diversity in ethnic and racial identities, age and body types, and styles of acting was absolutely an earmark of this production’s intent. The choices particularly pay off here in casting magnificent women in roles that were written for men. Given this sturdy array of talent, I think it is quite unforgivable that the production was so absent of dramaturgy, inexplicable in design concepts, and packed with confusing staging choices. The ghost of Hamlet’s father is the instigator of Hamlet’s journey through rage and madness, and yet the choices of recorded voice, and staging not one but three ghosts became, as a whole, unintelligible. The set was an unserviceable pile of corrugated tin, palettes and triangular platforms.

The lighting was murky and dark, largely focused on the set and rarely the players. Costumes put the murderous King Claudius and Hamlet’s mother Queen Gertrude, respectively,  in a shabby double-breasted suit and a tattered, shapeless dress of beige. Over what, exactly, do they rule? Perhaps the conceit is that they are not royal–but what about their status in the world of Hamlet? What is Denmark aside from Hamlet’s prison? The design team opens the show with Miles and ‘Trane (c. 1950s), then add the voice of Franklin Delano Roosevelt declaring a Day of Infamy (December 8, 1941) and that we have nothing to fear.  So are we in the Depression, and is Denmark meant to be a waste heap of tossed of metal and wood? Is it during WWII? Post War? What is at stake for Hamlet? If it’s revenge for a (pauper) father’s death, then this concept, evocative of Robin Williams’ film, THE FISHER KING, had a long way to go.  This is the problem when one hoists, smashes, or shoves a concept on top of a play. Hamlet is 4000 lines long.

If you stage all of it, we will be in the theatre for four hours. Cutting the play, and/or adapting it, requires a razor-sharp focus for structure, story, character—not to mention the prose and verse forms itself. Mas worked with Adaptor Lamar Legend (who is concurrently directing AYLI and performing in yet another project) but given unfortunate choices from one end of the production to the other, the tragedy of Hamlet remained on the cutting room floor. When we reach the final scene, the director and fight choreographer mis-read the sporting match (to which treachery adds murderous intent), as a knife fight-to-the-death. The fight choreography is either poorly directed or under-rehearsed.  These choices undercut the tragedy entirely. There is a similar problem when Hamlet attempts to “catch the conscience of the King” by employing a company of actors to reenact Claudius’ murder of Hamlet’s father. Why do the Player King and Player Queen in the play-within-the-play wear a Zoot Suit and flapper dress dripping with jewels?  How are the pauper King Claudius and Queen Gertrude meant to recognize themselves as their crime of murder is re-enacted to expose their guilt?

Because so much of this production fails in clear storytelling, I am going to close by focusing a spotlight on the one brilliant human at the center of all this. Nike Imoru has been on Seattle’s stage for a number of years now, and her utter grace and depth of craft rendered a Hamlet so ageless, so chasms-deep in intellectual and emotional pain that I was drawn to her Hamlet as, in the past, I’ve been transported by the Hamlets of Mark Rylance, Ruth Maleczech and Adrian Lester. Lester, under the direction of Peter Brook, inhabited the stage alone, relating the story of the Dane unaided by other actors, or any set beyond a Persian rug and a throne.  This is what Seattle Shakespeare could have done with this production; this is how magnificent an actor and artist is Ms. Imoru. Given the challenges to centering herself in this production, her effort is nothing less than heroic.

Not incidentally, Miles Davis and John Coltrane are not credited in the program.

Hamlet by William Shakespeare, runs in repertory with As You Like It  through March 13, in the Center Theatre at Seattle Center.  All info is available at seattleshakespeare.org