Undergraduate Theatre Society’s “Vietgone” Provides Laughs and Heartaches at the University of Washington!

America’s involvement in the Vietnam War is widely regarded as a mistake. A war that lasted nineteen years and led to the deaths of nearly 60,000 American soldiers has since led to a wave of anti-war movies, plays, and music. However, as displayed in Qui Nguyen’s Vietgone, this counter-cultural renaissance left out the voices of the South Vietnamese people, whose families were reliant on America’s involvement.

Vietgone tells the story of two Vietnamese-American refugees falling in love amidst the trauma of leaving their homes and families behind after the fall of Saigon. The show balances both comedic and dramatic elements, showing the ridiculous prejudice and cultural ignorance of 1970s America. 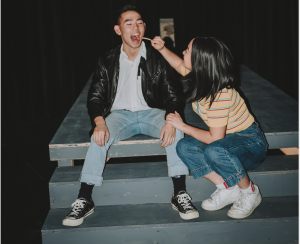 With the quick shifts in tone within scenes, it is certainly challenging for these actors to convey this story without putting too much emphasis on the comedic or dramatic moments. Fortunately, these transitions are smoothed via the immense talent of the cast. The romance between Quang (Aaron Kerschner) and Tong (Pearl Lam) could have easily been confusing, given that these two characters have such different personalities. It is clear that these two actors put their all into their roles to show the audience why this couple works well together. It is something that can only be achieved through a solid interpretation of these characters. Other standouts include Johnathan Nguyen as Quang’s best friend Nahn, and Alise Vu as Tong’s mother. Both of these characters are downright hilarious, knowing exactly where to emphasize more comedic moments and diving deep into their more serious scenes. All of this is to say that the audience was there for every belly-aching laugh and heart-wrenching emotional beat. 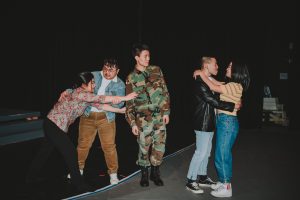 That being said, there were some issues in the set design. The stage was sparse except for a platform and a single projector screen. This meant that although scenes were occurring in separate countries and locations, they all looked nearly identical. This especially would get confusing when there were instances of double casting within the script. For an undergraduate show, I could see this working out better if there were small details such as military equipment for when the characters are inside a refugee base, or a few trees for externally based scenes.

Issues in blocking sometimes occurred due to this lack of set design. At certain moments it felt like scenes were too confined within one area of the set, leading to almost claustrophobic blocking directions when there was an entire stage that could have been utilized.

This was somewhat aided by some excellent lighting executed by Christie Zhao and Shun Liu. The change in lights to music and different scenery was truly spectacular, with more intense moments switching to harsh red lights, or strobes simulating alarm sirens.

I do not mean for these criticisms to undermine the immense passion that clearly went into this project. At the end of the day, this production was up to the actors’ ability to convey this story and they did so without fault. I would recommend this to theatre-goers looking for a wonderful comedic love story, that may leave you thinking harder about this turbulent time in history.