Every few years the appetite of community theater decision-makers and the arcane world of copyright and availability combine to bring one show into sharp focus around the country. A few years ago, “Xanadu” skated into theaters everywhere, complete with big hair and dubious Australian accents. This year, “Mamma Mia” makes its much-anticipated run around the world of community theater. And, why not? It’s infectious energy, sing in the shower ABBA tunes, and crisp dancing make it a natural. Three South Sound theaters are presenting “Mamma Mia” in the span of three months. This weekend, Tacoma Musical Playhouse was the second South Sound house to open the show, and they did it with on-stage style and grace under adversity. It was a night where actors delighted a capacity house and displayed a professionalism that sets the world of community theater apart.

What kind of adversity did this cast undergo? Sound issues plagued the show throughout the first half. One actor in particular got no love from his amplification gear, making it hard to hear what he had to say. Fortunately, two things are in play at this headliner theater. They did get the glitches mostly solved in the second half of the show, and they will get it all buttoned up for the rest of the run. This is a theater that takes its production seriously, and Drama in the Hood is confident that, going forward, the production values will equal the talent on stage.

You probably know the plot of “Mamma Mia,” from a stage performance or the movie starring Meryl Streep and Amanda Seyfried (since sequeled into “Mamma Mia: Here We Go Again.”). A young offspring of a single mother desires to find out the identity of her father. So, she invites three contenders to her wedding, hoping to sort out the mystery.

“Mamma Mia” is a particularly strong female show and Director Jon Douglas Rake (who choreographed the show, as well) should pat himself on the back for his casting decisions for the two female leads. Veteran actress Linda Palacios plays the role of Donna, and young Maggie Barry play the mother/daughter roles in this show. They are, quite simply, magnificent! It is customary in the case of musical theater to point out who sings the best. I cannot, and will not. When Ms. Palacios drew the spotlight, we thought, “Yessir, she is the one!” When Ms. Barry sang, we developed amnesia and said, “Oh, yes. She is the one!” Both of these two acted, sang, and danced their way into our hearts, using every bit of the stage to show off their ample talents and superb skills.

It has been said (by us!) that Linda Palacios appears to not touch the ground when she dances. In this show, the dancing is of the muscular and energetic type. Her agility, along with her dramatic and musical skills make her a treasure in any cast. 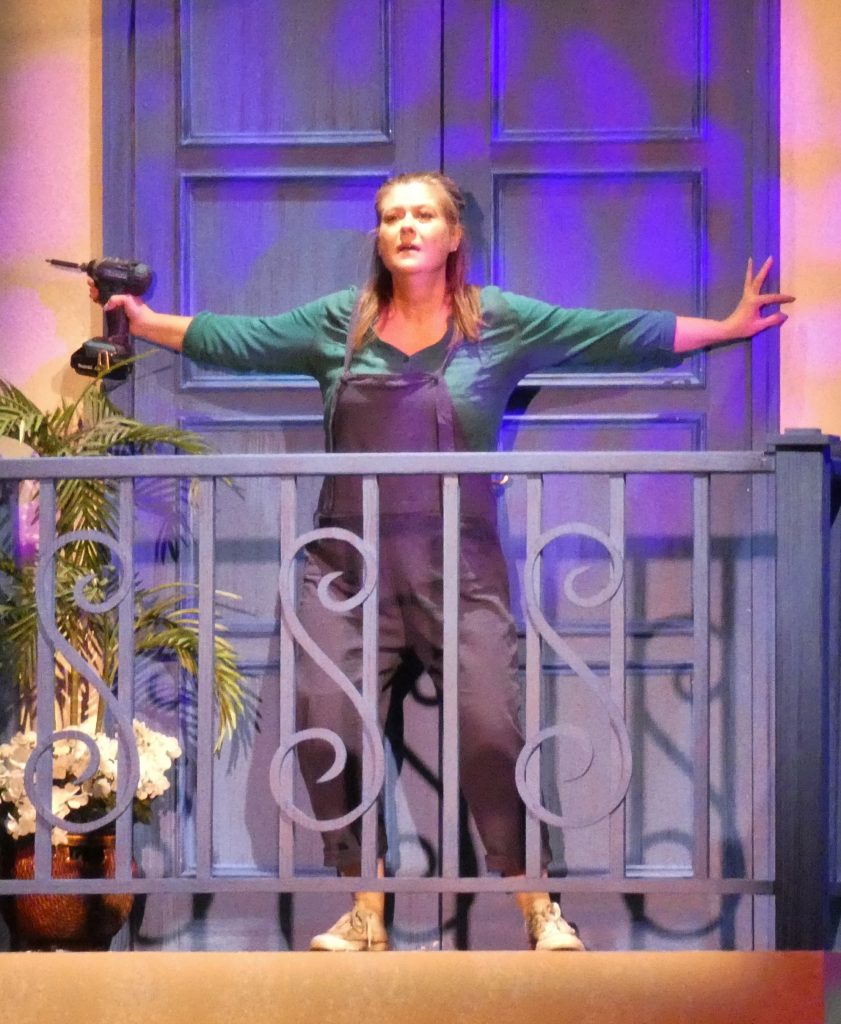 Drama in the Hood has had the pleasure of watching Maggie Barry perform for several years. “Mamma Mia” is her final local show before her college career in Oklahoma City takes her away from us. The Sooner State’s gain is the South Sound’s loss, as her skills have grown three and four-fold over the last few years. Godspeed, Maggie. Drama in the Hood predicts that you will succeed wherever you go.

Three potential Dads, one of whose relationship with Donna was particularly vexing. That was Sam, played each night except for June 13th (Jonathan Bill takes the role that night) by Scott Polovitch-Davis. Sam’s dramatic scenes with Donna were some of the best in the show, and Mr. Polovitch-Davis had his own star turn in the second act when he was excellent singing his solo portion of S.O.S. He is at his best singing alone and was wonderful during those moments.

“Are you my Daddy” Number two is Harry Bright, a former head-banger who turned Donna’s head during her personal Summer of Love. Gary Chambers plays Harry, and performs yeoman work, though his was the microphone that glitched out through most of the first half of the show. Sound techs worked feverishly during intermission to get things right, and they were much better during the second stanza of the show. Mr. Chambers is one of this area’s most professional performers and his patience must have been taxed, but the audience never saw that frustration come to the fore. Harry is a gentle soul, at heart, and Chambers explored his character’s role superbly. His portion of “Our Last Summer” was his finest vocal performance of the night.

“Papa?” Number Three is Bill, played by Sam Barker. One of the areas best comedians, Mr. Barker’s Bill Austin is played with broader humor than is Sam or Harry. Sam Barker is one of the finest comedic actors in the area, and is excellent in the part. 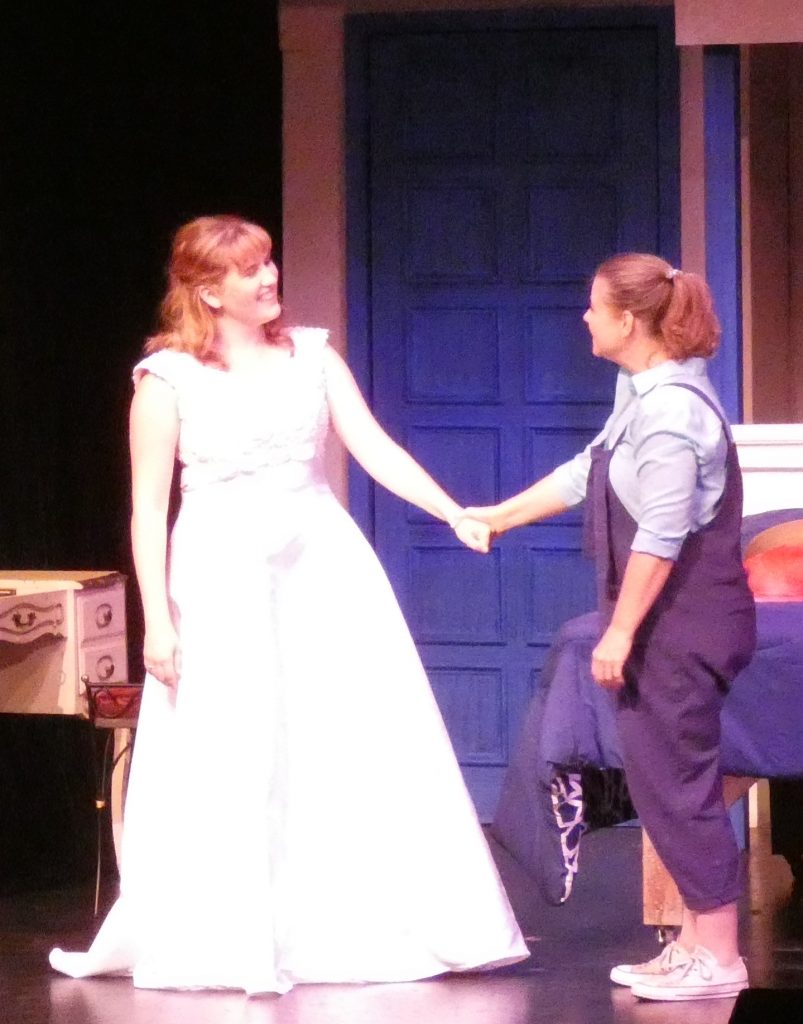 Michelle Bettinger and Dana Johnson play Donna’s best friends, Rosie and Tanya respectively. Each had their moment in the sun. Ms. Bettinger wooed Sam Barker’s Bill in a hilarious mating dance to the tune of “Take a Chance on Me,” while Ms. Johnson took Tanya’s inner Cougar out for a spin in a hugely entertaining “Does Your Mother Know?”

No girl should marry without her best friends in tow, so Emma DeLoye’s Ali, and Courtney Eggert’s Lisa are an important part of this ensemble cast. These two have an excellent stage rapport with Maggie Barry and made the relational impression work to a charm. Nicely done, ladies.

In a small part, but one that he handles beautifully is fiance’ Sky, played by Donovan Mahannah. The best actors stay firmly in character and add to the scene, even when the action is elsewhere. Mr. Mahannah does a very good job at this part of the stage experience. Mr. Mahannah caught our eye in “Newsies” and in “Bye, Bye, Birdie.” He is a talent to watch grow.

We would be remiss if we didn’t give shouts-out to some of the supporting individuals who make this show as fulfilling as it is. Dennis Kurtz’s set is so solid and believable as to make the audience believe the buildings were real and the Ionian Sea must be just around the corner. Props to Mr. Kurtz and his crew.

Costume designer Janet English went above and beyond when she dressed this cast. Obviously, Drama in the Hood has no idea when Maggie Barry will marry, but basing her wedding dress on this one would not be the worst idea. Ms. Barry is an exceptionally pretty young lady, made stunning in the wedding dress she wore in this show.

The ensemble of singers and cavorting dancers filled the stage in front of a capacity crowd Opening Night. The crowd was into it from the beginning and a good time was had by all. Make plans to see this show as it improves and matures even more. Do you intend to go? Nod your head up and down and say, “I Do, I Do, I Do, I Do, I Do.” Good for you. You’ll be glad you did.