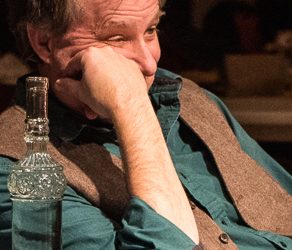 Critics arguing that Seattle’s current theater scene is in an impressive Golden Age, need not look any further than the stellar production of Uncle Vanya taking place on Capitol Hill at Theatre 9/12 to support their claim. Once again director Charles Waxberg has gathered some of our area’s top actors and elicited breath-taking performances from them as they work their way through Annie Baker’s 2012 translation of Chekhov’s classic.

Baker’s unadorned, free flowing approach to dialogue helps dust off some of the stodginess that may crop up in older translations of the play. The Pulitzer Prize winning playwright (The Flick 2013) has the ability to turn casual conversations and observations into something very important and almost poetic. Under Waxberg’s direction, the cast takes this well-crafted script and runs with it. Nearly every character in the play has at least one moment to command the stage and bring Chekhov’s work home. Unlike Shakespeare, Chekhov’s heroes are not interested in stretching the bonds of human limitation; rather, they gamely focus on merely surviving another day. Early in the work, Sonya observes that boredom is contagious and indeed each character is in a pitched battle against modern ennui. In addition, Chekhov’s characters struggle with disappointments in love, fears of aging and a nearly constant rubbing raw of interpersonal clashes. Yet, Uncle Vanya’s household soldiers on, tirelessly seeking moments of solace and quiet.

Terry Edward Moore’s brilliant portrayal of Uncle Vanya centers the production. In early scenes he imbues his character with a tired irony, expressing his frustration in his pursuit of the lovely Yelena (Colleen Carey) and exasperation with the pompous Professor Serebryakov (Michael Ramquist). Later his fury directed at the insurmountable obstacles he faces in life lead him to moments of powerful rage that at times are truly harrowing and at other times nearly cross into theater of the absurd. Moore’s work expertly hits all the notes of Vanya’s tortured character.

Despite Yelena’s claim that she is merely a boring minor character in a play, Carey’s portrayal of the Professor’s much younger wife is a fascinating piece of acting. She effortlessly shuttles between a nearly preternatural self-confidence and heartbreaking internal conflict concerning her attraction to Dr. Astrov (Tim Gagne). In exasperation she asks, “How are we going to get through the winter?” Carey’s acting here helps the audience understand that despite her captivating charm, Yelena will have a very tough road ahead.

The role of Vanya’s niece Sonya, is one of Chekov’s most tragic characters. She must watch her captivating stepmother steal the heart of her secret crush, Dr. Astrov as well as deal with the loss of her home when her father decides to sell it off. Laura Bannister’s thoughtful work here highlights both Sonya’s nearly debilitating insecurities and her innate strength. Her joyful reconciliation with Yelena is one of the highlights of the production. Another is her mournful closing monologue in which she comforts her uncle, promising a final rest after our tormented lives on earth have been completed.

Gagne energetically brings Dr. Astrov alive. His tragic fall from idealistic social reformer to confused and discouraged lover is another key character arc in Chekhov’s play. The drunken late nights Astrov spends with Vanya nicely capture the shiftlessness of the middle class in turn of the 20th century Russia.

Waxberg makes expert use of the intimate setting the Trinity Episcopal Church offers as a venue. Often the characters seem to be pleading their cases in front of us like passionate lawyers in front of a swayable jury.

It is up to the housekeeper Marina, played by a focused Therese Diekhans to sum up the effects of the play. She claims with a sigh, “The ganders squawk and then they stop.” But what insightful and moving observations Chekov gives them before they all fly away!

Uncle Vanya runs through March 10 at the church on the hills just above Seattle’s city lights. Sadly, Theatre 9/12 will have to relocate when the building will be renovated. For more ticket information go to www.Theatre912.com