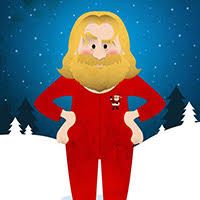 The Best Christmas Miracle is Just Waking Up!

On a very stormy night, when the winds were blowing, when the rain was pelting down and branches were scraping not just the roof of my car but even the hood, I had the pleasure to take part in a heart-warming but irreverent “participantry” hosted by Sugar Plum Gary aka Emmett Montgomery, in the small intimate space at 18th and Union. It was one hour of sheer delight, as Sugar Plum Gary dressed in a bright red onesie answered questions from the audience about Santa Claus and Christmas.

It was difficult to describe the style of humor, except to say that it was incredibly witty and irreverent but at the same time wholesome. Emmett Montgomery is also that rare breed of performer, who can communicate huge amounts of laughter, without saying anything; he is THAT funny. And warm and cuddly.

Since everything is unrehearsed, he answered strange and bizarre questions with the speed of lightning, so that one would have thought the best comedy writers in Hollywood, would have had to spend hours writing the material  But no his answers were all spontaneous. With his gravelly voice, at times he seemed like something out of the 70’s stoner culture, at other times, like a schizoid street philosopher, at still others like some kind of sci-fi futuristic narrator, and all the time looking just a tad like Rasputin. But it was hilarious from start to finish.

Laughing at wit and wisdom is one reason to go to see this show, laughing with other people is another reason to go to this show. Seeing a great comic genius is another. I predict that, even with two shows per night, the production will be sold out very shortly.