William Shakespeare needed to eat. While his tragedies and dramas were his favorite (or, favourite, if you will) plays to write, the crowds never flocked to the show as much as when he staged a raucous comedy. His comedy, 12th Night (Or, “What You Will”) was designed as a palate cleanser after the holiday season, but was not performed until almost two decades after it was written. It draws upon some of W.S.’ best comedy constructs, namely drunken carousing, mistaken identity, and gender bending. It is a solid choice for community theater and was performed with great skill and verve by The Changing Scene Theatre Northwest on the occasion of its opening weekend. 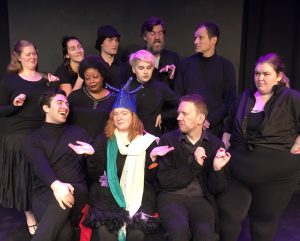 Some of Shakespeare’s comedies are subtle and arch. 12th Night is not one of those. Instead, the Bard introduces this show’s most-outrageous comedic player by naming him Sir Toby Belch. Played with great loutishness by Ben Stahl, Sir Toby is a little boy in a man’s body. While Mr. Stahl can play dramatic roles, even in them he seems to perform with a twinkle in his eye. He’s probably the best man in town for this role. Mr. Stahl careens about the stage, and pretends to lose his lunch more than once. This is a role that begs to go over the top. Ben Stahl takes it there with a great deal of joyfulness.

Stahl’s partners in crime are Feste the Fool, played by Corissa Deverse, and Sir Andrew Aguecheek, played by Zach Forbes. Together, these three keep the mayhem going for the length of the show. Ms. Deverse is an excellent physical comic, throwing her legs in the air as she flops into a seat. When she bites her bottom lip it is a signal that something funny is about to happen, and she is more than able to carry her part of the comic load. Zach Forbes is coming into his own as an actor and is learning the comic part of the game very nicely. He has never been funnier than he is as Aguecheek. He and Ben Stahl play off of each other to great effect.

The last time Nick Fitzgerald was on this stage it was in the highly dramatic “Bent.” Mr. Fitzgerald received a Best Actor award nomination for that turn. In 12th Night, his Malvolio spends a good portion of the play dumbfounded. It takes a highly skilled actor to spend the better part of 2.5 hours in a state of perplexity. Malvolio’s reaction to a letter from a supposed love interest was laugh-out-loud entertaining.

Jill Heinecke has been a critical favorite in this town since her turn in “The Fox on the Fairway” for Tacoma Little Theatre back in 2015. Since then, she has entertained in many shows and never fails to be one of the best actors on the stage. Once again, her star shines brightly in the role of Olivia. Ms. Heinecke’s expressive face displays pleasure, confusion, distrust, and pleasure again, all in the span of a few seconds. She’s one of the South Sound’s best. Director (and head of The Changing Scene Theatre Northwest) Pavlina Morris is lucky to have Jill Heinecke on board.

In a pair of smaller roles, Nastassia Reynolds stood out in 12th Night. She’s a fine actress who carried both of her roles across very nicely.

Finally, Paul Sobrie and Kathryn Stahl were excellent, as well. Their roles (Orsino and Viola, respectively) are about the only two that Shakespeare wrote with any sort of subtlety on board. Mr. Sobrie and Ms. Stahl found that measure of subtlety with chaos all about them. It would have been easy for them to overplay their roles, but they did not. Kudos to them both.

The Changing Scene Theatre Northwest has made its mark in South Sound Theater, particularly over the last 12 months. The company appears to have found its stride by never flinching from . difficult works. “Bent” was a tough go. Shakespeare is a tough go. Drama in the Hood loves lavish productions by the big houses as much as anyone, but we find a special place in our rooting heart for theater companies operating on a shoestring budget, with actors performing their hearts out for a few dozen people. Before this show runs out, plan on being among the lucky few dozen to see it. It was written as a palate cleanser, but it performs as a delightful evening of fringe theater.

Dearly Departed’s Skewed (and accurate) Look at Grief for BCT
February 11, 2020
© 2022 Drama in the Hood. All rights reserved.
Site Design