Resolutions-Live Radio Show to Usher in the New Year 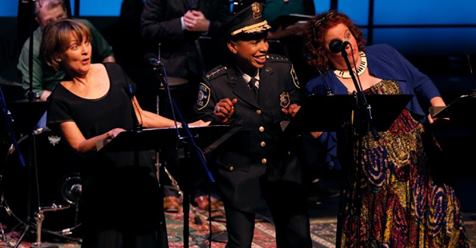 Is how I would describe the enthusiasm with which I “consumed” the latest Sandbox Radio production, Resolutions. * A line from the show.

After having the sheer pleasure of attending Sandbox Radio’s holiday live radio show, at the ACT theatre, I decided that my New Year’s resolution would be to declare Sandbox Radio a Seattle “City Treasure,” seek funding, so that it can produce weekly radio shows. 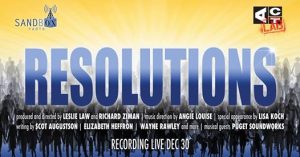 Producer’s Richard Ziman and Leslie Law’s latest production, perhaps their best ever, was absolutely stunning, while being full of topical satirical humor about Seattle’s politics and a few of our more famous public figures. As always, part of the joy was the audience participation, and the warm connection between the audience and the hosts, Ms. Law and Mr. Ziman.

Following the format of old-fashioned variety radio shows, Resolutions had original music composed by José “Juicy” Gonzales and Angie Louise, original sketches by playwrights Elizabeth Heffron, Scott Augustson, & Wayne Rawley as well as readings from stories by humorist James Thurber and poetry by A.A. Milne. In addition there were choral numbers by Puget SoundWorkds, which were oddly entertaining. 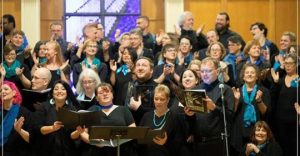 True to the format of other live radio shows, there was a PSA sketch called MyFather’s a Lawyer, written by Peggy Platt, advertising the ACLU, using a parody of litigious children. (N.B. comedian Peggy Platt, once a regular on Sandbox and half of the comedy due Dos Fallopia, passed away suddenly last April)

Although it is difficult to determine which numbers stood out, as they were all stratospherically fabulous, several had resonance with the current zeitgeist of Seattle. Macho Genetics by Elizabeth Heffron, was about a chaotic bio start-up, trying to locate their AWOL top-notch genetic engineer, while trying to placate an investor. Then there was Tumbling Down by Scot Augustson about a Godzilla situation in Seattle, with Carmen Best, Seattle’s new police chief playing herself.

Another funny sketch was led by Richard Ziman called Controlly Interest by Wayne Rawley, about several pre-pubescent boys transitioning from the “I hate Girls Syndrome,” to …..the next developmental stage. It was hilariously funny, and featured Lisa Viertel, playing a role like Lucy in Peanuts.

Perhaps the sweetest number was a duet sung by Law and Ziman called A Kiss to Build a Dream On, written by Bert Kalmer, Harry Ruby and Oscar Hammerstein, in 1935, for the Marx Brothers movie, a night at the opera. Although it is an “oldie” recorded by people like Louis Armstrong and Bing Crosby, the two brought it to life in a very touching manner. 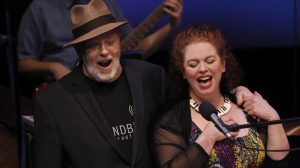 Also, Lisa Koch, Peggy Platt’s partner performed a guitar solo, switching from one funny parody to another, her swift transitions from one style of music to another was formidable. 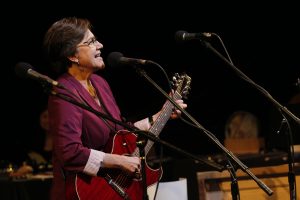 All in all, it was just one laugh after another and our host Leslie Law was as warm and convivial as a host could be. Although it only played for one night it is available on podcast ( see www.sandboxradio.org)and also one can ask Alexa (and their imitators) to “Play Sandbox Radio Live on Tuneln”

If you felt like donating, see https://www.patreon.com/sandboxradio.to sustain this uniquely Seattle experience, which I believe will go down not just in Seattle history but also in show-biz history. 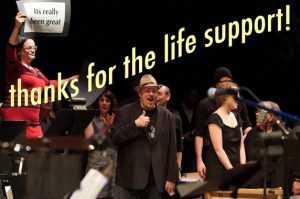 Yes it is THAT good.

* Like a vegan in a kale trough,” is a line from Tumbling Down by Scot Auguston.