Walt Whitman and I and You 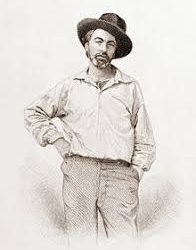 Because I have some understanding of the great American poet Walt Whitman, Marie Bonfils asked me to drop in on I and You, currently wrapping up its run at the Theater Schmeater in Belltown.   I am so glad she did! The show is a co-production of Schmeater and Pratidhwani, a non-profit organization dedicated to helping South Asian artists here in Seattle. The resulting collaboration has provided an exciting opportunity to see an outstanding play, brilliantly performed in a most intimate setting.   Currently, playwright Lauren Gunderson is on an impressive roll. Her delightful The Book of Will was the surprise hit of the 2018 Oregon Shakespeare Festival. I and You has already been staged three times in Seattle.  The utterly captivating romance (and so much more) will wrap up its run this weekend.

In I and You, Gunderson has her two awkward teens work together on a Walt Whitman project. Most of his lines presented in the play can easily be tied to the poet’s link with the transcendentalist themes that were popular in nineteenth century Northeast America. Basically, the transcendental philosophy argues for a greater emphasis on an individual approach to God, an approach that emphasizes a greater understanding of the natural world, and finally an appreciation of the mysterious inter-connectedness of all humanity. The transcendentalist argues that we should be true to ourselves, but we should also always be aware of the bonds that bind us to each other.   The knock you out of your seat dénouement to Gunderson’s play personifies these philosophical notions.   All in all, Pratidhwani and Theater Schmeater have fashioned a fantastic, thought provoking night of magical theater. I heartily encourage you to take this winner in!  The show runs through November 3.