The White Snake-Stuns not with Venom but with Beauty

One of the four great Chinese folktales, the tale of The White Snake has evolved over the years from a horror story to a romance. It has been performed as an opera in China, musical theatre in Hong Kong, and a dance piece in Taiwan. Zimmerman’s English version premiered at the Oregon Shakespeare Festival in 2012. React’s production is the first all Asian Cast in the U.S. And what a cast it was!!!

In Chinese mythology, snakes are often portrayed as fantastical beings, often with a mix of human body parts, either a human head and a snake body or a human body with a snake tail. Also there is the festival of the Double Fifth, on the 5th day of the 5th month, when one is supposed to expel various sources of potential evil influences. On this day there are five noxious creatures, considered evil influences, one is supposed to expel. One of them is the Snake. The symbol of the snake may not have the sexual overtones that it does in Western Biblical mythology, but it is not exactly as warm and cuddly a symbol as a lamb.

In this tale, a white snake living on a mountain, above a Buddhist monastery, with her pal a green snake, study Taoist scholarship for centuries to transform themselves into mortals, so that they can head down the mountain to experience the “world.” Along the way, the White Snake falls in love with, and marries a humble pharmacy assistant, without revealing her true nature. While she is pregnant, the evil and corrupt abbot of the monastery reveals the truth to her husband and very effectively sabotages their happy marriage. Although he is confused, her devotion makes the husband realize that it does not matter whether she is a snake or a human; that one cannot judge a person by the externals It is not a completely happy ending but love does triumph. 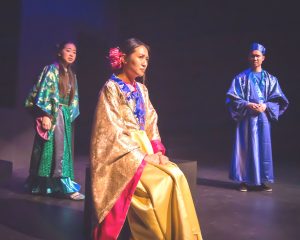 Zimmerman’s adaptation of the myth had a coherent plot and more importantly, linguistically tailor-made dialogue, which was not written in early 21st Century colloquial English. The language of the dialogue, sounded like a direct translation from a foreign language, without being stilted, even though she used constructions that native speakers normally do not use in everyday speech. It is a credit to the cast that it all sounded completely natural as well as appropriate for the characters.

Traditional music, composed for the production by Steve Tran, functioned as an integral part of the production. Often the music shaped the dramatic tension, set the mood and punctuated the dialogue. Just as music, it was magnificent.

Including the three narrators, Kathy Hsieh, Jessica Wu Barlas and Tammy Nguyen, the cast, was outstanding, Anna Saephan as The White Snake, played the vulnerability all of us feel when we fall in love, will they still love me if they know what I am really like. Her sidekick Yena Han, was worthy of the role, wisecracking, devoted, sarcastic, overly-expressive and feisty. As the incarnation of evil, Edward T Tonai’s Fa Hai, the evil monk, made me want to boo. 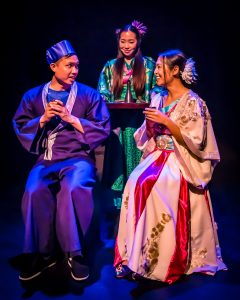 In short, this was a brilliant production, which everyone should see. Not just because of the quality of the production, but because something like this is not produced often enough in Seattle, though I hope that ReAct produces more Chinese mythology with the same cast, director and especially the same composer. 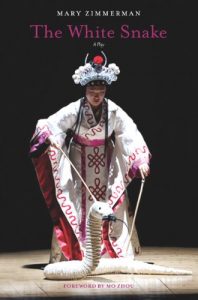