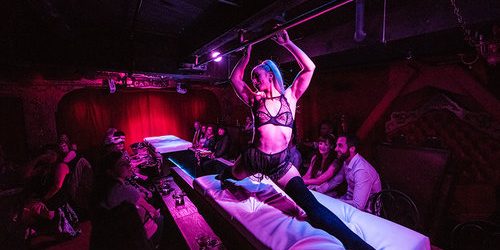 October is now upon us and with it comes not just the rain but Halloween season. The Can Can Caberet’s recurring “Zombie Cheerleaders from Hell” may run for half the year, but October is indubitable the most seasonally appropriate month to stop in.

This original burlesque dinner production is exactly what it advertises to be, that is to say it’s funny and there’s quite a bit of near nudity. Jonathan Betchtel is the high school mascot-turned-zombie who hilariously pulls the bare-bones narrative together, ad-libbing frequently with the audience and introducing each “scene.” Shadou Mintrone, Madison Oliver, and Sarah Rose Davis star as the cheerleaders and show off some impressive dance skills as they prance around the room dressed in very, very little. While my repressed bourgeois sensibilities could have done with a little less nudity, you can’t deny their talent and performance chops. . Jordan Taylor was endearing (and also very naked) as the quarterback and object of Betchtel’s obsession.

The show used a variety of lighting and sound techniques that at times created some stunning visual effects reminiscent of a highly-edited music video. Betchtell and Mintrone must be given particular props for a gravity and, seemingly, anatomy-defying performance within a spinning, coffin-shaped cage that simply dripped with chemistry. Despite the lack of clothing (have I mentioned that yet?) there isn’t anything sleazy about the production, the dancers are all genuinely talented, the venue itself is glamorously-cool, and the food, while expensive, it extremely good.

This is a 17+ performance, because, as Betchtel once puts it, the routines seem “A little inappropriate for high school.” However, it should be enjoyable for anyone who likes to laugh, appreciates the human form, and didn’t get too into that one gender studies class they took in college.

Through the Looking Glass: The Burlesque Alice in Wonderland
April 27, 2017
© 2020 Drama in the Hood. All rights reserved.
Site Design