Le Prénom- ( What’s in a Name) Hilarious comedy in French. 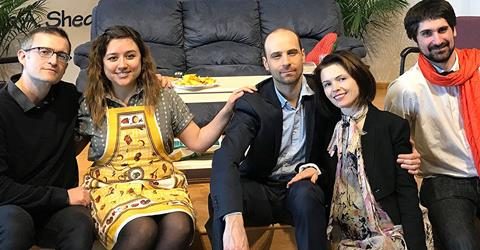 If you want to laugh uproariously, while improving your French, go to see Le Prénom, a French play in the original language, produced by Les Seagulls. On both fronts, laughing uproariously and improving your French, Le Prénom by Matthieu Delaport and Alexandre de la Pattelière, fits the bill. Although the show opened in March in Kirkland, there will be two more opportunities to laugh at this award-winning play, in May. ( N.B. le prénom means “first name” in French)

Anyone who is a movie fan or a theater-goer, will recognize the premise of Le Prénom, It’s a familiar theme: a group of thirty-somethings, who have known each other since childhood, get together for one of their regular dinner parties. In this case, a married couple, in whose apartment the play is set, who have two young children, a husband, whose wife has not yet arrived (she is a relative newcomer to the group), who are about to be parents of a baby boy, and a bachelor. 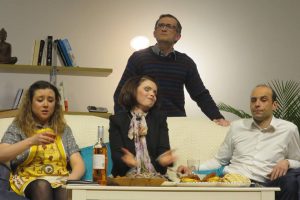 As anticipated by the audience, something is about to go wrong. A trivial joke, made by the expectant father, about the first name of the expected baby boy, triggers a cascade of invectives, from each of the other characters in turn. In the ensuing discussion, a lot of dirty laundry has been hung out, with each character expressing repressed resentment toward the others. By the end of the play everyone has had a traumatic experience that has changed their lives. But an epilogue assures the audience that airing all that dirty laundry actually created a tighter bond among them, and things end on a happy note.

Why should we want to see this particular take on the genre? One reason is that it gives a fresh look at the situation: It is done with a specifically French touch. The title Le Prénom is significant, as it has a particular French connotation. In France, the government used to publish a list of officially acceptable first names! If parents chose a name not on the list, there was trail of red tape, that had to be followed to get official permission to name a child an unusual name.
In the play, the couple with the children, have done just that.

Another reason to see the play is that the subject is treated in a very humorous way with a surprising ironic twist at the end. The very animated ensemble cast of Jérôme Vasseur, Julién Bouétard, Katya Semoylenko, Clarisse Podalin et Cédric «Caribou» Barnet delivered hilariously funny performances, full of Gallic wit, under the expert direction of Sébatien Plisson.

For English speakers, it may help to watch the movie version What’s in a Name, available from Netflix,or read the synopsis in English

Read other reviews by Paul Desloover