“Catch Me if You Can” was most recently a hit movie. A true-life story of a con man and the cop bent on nailing him, it starred Leonardo DiCaprio and Tom Hanks in a chase movie enjoyed by millions. Last spring, when Tacoma Musical Playhouse Managing Artistic Director Jon Douglas Rake announced this show as part if the 2017/18 season at TMP the reaction was…” really?” As a globetrotting movie, it wouldn’t seem to lend itself to the stage. As a cops and robbers movie without songs it would seem to be a tricky translation to a theater with “Musical Playhouse” in its name. However, Rake himself took the directorial reins, TMP’s own Jeff Stvrtecky directed the music and the show works and works well. The show, based on the book by Terrence McNally, opened to large and enthusiastic crowds this weekend.

Playing the DiCaprio role of Frank Abegnale Jr in this production is Jake Atwood. One of the busiest actors in the South Sound Mr. Atwood has been checking off the boxes of professional growth all over the area. When he needed to improve his singing, Atwood took on “Forever Plaid” in Bremerton. When his guitar licks needed polishing, he backed up Matt McClure’s Buddy in “Buddy: The Buddy Holly Story.” Now, ready to co-lead a major community theater production, Jake Atwood does a marvelous job! No one in local theater comes to mind faster when “cocky” comes to mind. In fact, no one comes to mind any more apt in the role of Frank Abagnale Jr. Frank is a brilliant mind, with amoral ethics. He’s brash and lonely, all at once. Jake Atwood hits all the notes and hits them with humor, dramatic import, and pathos. It was once said about Mr. Atwood that the South Sound may not hold him for long. He only continues to make that prediction seem more plausible.

In the cartoons of yore, Jerry needed his Tom and the Roadrunner needed Wile E. Coyote. Otherwise, all the running around is anticlimactic. Frank Abagnale Jr. needs his FBI-agent Carl Hanratty. As the steely-jawed Hanratty John Miller is more than up to the task. To play the lawman is asking enough, but Director Rake needed more from Miller. He needed a lonely air to match Abagnale’s. Some of this show’s best moments are when Atwood and Miller are on stage together. They work as one.

” I could listen to him read the phone book.” That’s what one TMP patron said about Jonathan Bill’s performance as Frank Abagnale Sr. Of course, someone says that about EVERY role Bill plays. He has perfect, God-given, pipes for both the spoken word and the sung note. As Frank Jr’s Dad, though, Bill finds a new level of quality dramatic work. Frank Sr. is an empty shell behind a rickety facade. His son is who Frank Sr. wanted to be, oblivious to the toll the life is having on his son. Toward the end, when Frank Jr. is ready to call it quits, Dad urges him to “keep going, you’re on a roll.” It’s the plaintive cry of a man whose own “roll,” has come to a stop. Jonathan Bill is a mainstay on this stage, and TMP is on its own roll, with the roles he plays.

At the beginning of the play, before Frank Sr.’s balls of financial deception fall the ground, he’s married to Paula Abagnale. They married too young, and her husband’s fiduciary chicanery is doomed to bring the family down. Paula strays, then leaves. As Paula, Linda Palacios ably displays the elegance Frank Sr. saw in her in the first place. Her feet don’t touch the ground when she dances. Instead, she floats on gossamer wings. (We know that isn’t true, but Ms. Palacios moves as if it is true.) Paula Abagnale was born in France and Linda Palacios’ French accent is good. Most of the time, she drops it when she sings. But, her performance was a show highlight. 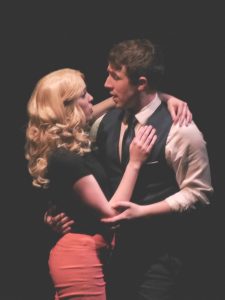 Claire Barton and Jake Atwood in TMP’s production of “Catch Me if You Can.” Photo by Kathleen Dollarhide.

“They all make one mistake.” That’s what Carl Hanratty says about successful criminals. It turned out to be true, in a sense, for Frank Abagnale Jr. When he gave up his heart, Frank’s career as a con man was over. The heat was all over his publically-announced wedding plans. It was time for Frank to come in from the cold, however, and who better to snare him than Claire Barton, in the role of the fetching Brenda Strong. Claire Barton makes her TMP debut in this show, but this isn’t her first featured role. Earlier this season, at Bremerton Community Theatre, Ms. Barton nearly stole the show from the leads in “Boeing, Boeing.” As Brenda, she’s vulnerable and transparent, then strong and charismatic. As she proved to be the honest place that was missing in Frank’s empty heart, he gave in to her, and the audience nodded. “Yep. That could happen.” A fine job by Claire Barton, who is ready to star in a show. The casting director who sees that will have a winner.

Michelle Greenwood Bettinger and Peter Knickerbocker play Brenda’s parents Carol and Roger. Carol is immediately taken in by Frank Jr’s charms. Roger is skeptical. Good work by both. Mr. Knickerbocker, in particular, is becoming a local favorite. As for Ms. Bettinger, her “Butter my buns” line was among the more memorable from this show. She delivers it with conviction, as someone from N’awlins would!

This excellent ensemble makes one musical theater review staple hard to complete. It is common to name someone “best singer” in a musical production. That isn’t possible in “Catch Me if You Can.” Atwood, Bill, Palacios, and Barton were all tuneful and accurate. Miller threw his heart into the musical numbers, as well.

‘Mamma Mia” a Smash Hit for Bainbridge Performing Arts!
May 5, 2019