Any actor, who takes on the role of Max Bialystock in the The Producers, has a tough act to follow. But, Nathanial Jones in Seattle Musical Theatre’s current production of the musical adaptation at Magnuson Park, was every bit as irreverently funny and commanding as the original Max Bialystock-Zero Mostel. Under the direction of Alan Wilkie, author Mel Brooks’ comedic one-liners were delivered with rapier sharp timing, keeping the audience laughing the whole time.

As in many successful two person comedy acts, there is a straight man, an unexpressive repressed type playing off an overly-expressive type. In The Producer’s, there is Max, a brash, egotistical stereotypical New Yorker, who not averse to dishonest, and Leo Bloom, played by Brad Walker, an introverted everyman accounted, vulnerable and risk averse

While doing Max’s accounting, after Bloom casually remarks that a show that fails could be more lucrative, the two hatch a plot to raise extra funds, produce a slam-dunk flop and pocket the surplus cash. Anyone familiar with the 1968 movie The Producer’s knows that Max and Leo, pick the most offensive script, Springtime for Hitler, written by a Nazi lunatic, Franz Liebkind, (Lovelychild in German) played by Jaron Boggs, and the worst director, the ultra-campy Roger de Briss, played to perfection by Shane Patrick Hoffman.

The script spoofs just about everything: 1) musical theatre itself with the number “Springtime for Hitler” when a fabulous tenor sings, while chorus girls decked out in every German ( that is Bavarian) stereotype come down a long staircase. 2) Broadway producers 3) critics, 4) the bad taste of the public and dictators themselves.

Although the antics of the two leads carried the show, the supporting cast is to be commended as well, Noel Pedersen as Ulla, the Swedish bombshell of a secretary/receptionist, was a great singer/dancer/ actor. Shane Patrick Hoffman as Roger, the director, was one of the greatest drag-queens on any stage on the West Coast. Thadayus Wilson as Carmen Ghia was hilarious from the moment he pirouetted onto the stage. The one disappointment was Jaron Boggs as Franz Liebkind, the Nazi author of the play, his overly caricatured performance disintegrated shouting 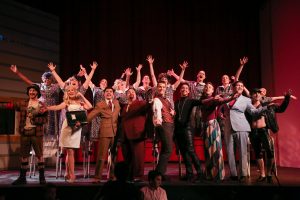 The strength of this production was in the direction, the acting and the highly creative and well-executed choreography by Kate Kingery and the ensemble cast. Max’s first solo, to Klezmer music, had wonderfully funny choreography to accompany it. The dance of the inhabitants of “Little old Lady Land” showed off the creative genius of Ms. Kingery and the “Springtime for Hitler” number was perfect.

Under the direction of Music Director, Josh Zimmerman, the singing matched the high quality of the choreography and acting. There were a few opening night glitches with microphones and sound levels, but I am sure that will be taken care of.

The weakness of the production was the script itself. Although many of the jokes are still funny, the material is rather dated. In 1968, Hitler was still Public Enemy Number One, as there were still Holocaust survivors and relatives of Holocaust victims, living in the U.S. In the 1950’s and 1960’s, there were plenty of rumors that Hitler had escaped and had been living in South America. Since then, Hitler is only one of many menacing villains, Khadafy, Ben Laden, Saddam Hussein, “Voldemort” Putin, etc and since 1968, we have had several genocides seared into our memory, not just the European one of the 1940’s.

Also, in 1968, having a man actually wear a skirt in a mainstream movie was positively risqué! In those days, show business people were very closeted as was everybody else. The idea of a Swedish receptionist/secretary was a symbol of sexual liberation itself, because the Nordic countries were much more advanced in terms of sexual freedom and had a reputation among Puritanical Anglo-Saxon countries for advocating what was called “free love” (that is to say being open about casual sex).

Another weakness was inherent in the adaptation from a movie. Movies usually have, as this one does, very short quick scenes, with numerous set changes, rather than one set, for each act, as stage plays do. Having so many different short scenes with different sets created difficult and cumbersome set changes. SMT does not have the technical capability to execute those changes swiftly.

In addition, the show itself is too long, 2 hours and 45 minutes with only one intermission. It would have been better to cut some of the musical numbers, as there were some, which did not advance the plot.

All in all, due to the stellar performances of Nathanial Jones as Max, Brad Walker as Leo, Shane Patrick Hoffman as Roger and Thadayus Wilson as Carmen Ghia, the superb choreography and of course the great singers and dancers in the ensemble, I would get your tickets now. The humor is not of the saccharine variety, you won’t find any high fructose syrup jokes, it is sheer irreverence, served up with some authentic New York relish.