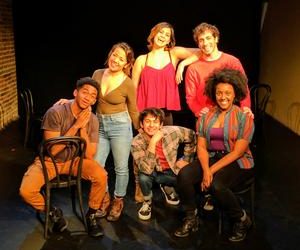 What it is like to be perceived as the “Other” and still try to get the part.

“I want to be a raisin in a rainbow” exclaimed one of the actors in Raisins in a Glass of Milk, a scripted performance by six Cornish students and alumi, currently playing Sunday nights at 18th and Union Theatre. The subject was the casting difficulties one’s appearance causes if one’s appearance deviates from the perceived ideal of “normal” in our society, which is still the Northern European blue-eyed blonde.

Raisin in a Glass of Milk also recounted how difficult it is for any individual, perceived as “the other” to deal with the daily unrelenting remarks from the “normal-identifying,” who may have unknowingly oppressed someone with thoughtless questions and remarks, that are really none of their business.

In addition, it also was filled with personal stories about how passionate these young people are about their art, and how they strive to get beyond the superficial and one-dimensional, as every human being does, and just be recognized for what they do, create art, and for what they are, complex human beings like every other human being.

The only thing that was missing was a discussion of white “shadism” in the entertainment industry. Personally, I suspect that there is as much blonde hair dye among Caucasian actresses floating around Hollywood as there is hair-straightener among African Americans actresses. Even white brown-eyed brunettes are often only castable as Jewish Holocaust survivors, Hispanics or Italian Mafia Molls, if they live in places like Minnesota, where diversity is defined as: when Swedes live in the same county as Norwegians.

Although Raisin in a Glass of Milk is highly amusing and interesting, it is also highly informative, and is a must see for all those who have never considered themselves the “other.” It would be especially enlightening for Caucasians who have never lived abroad, where all Americans are subjected to hateful stereotypical comments.