Bring Down the House, Part 2: Crusade of Chaos

In Seattle Shakespeare Company and upstart crow collective’s Bring Down the House, Part 2: Crusade of Chaos, the court drama from Part 1 spreads to the battlefield. This epic conclusion of Rosa Joshi and Kate Wisniewski’s adaption of Shakespeare’s Henry VI trilogy is a moving, exciting tale of the violent fallout of political ambition. 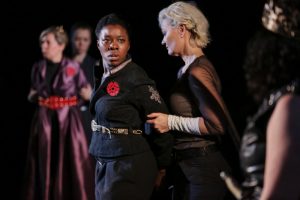 Bring Down the House, Part 2: Crusade of Chaos has a much wider socio-political and socio-economic scope than Part 1. Shakespeare’s Henry VI trilogy covers the period of growing tensions at court before the War of the Roses, the beginning of the War, and its moral and political fallout. Bring Down the House, Part 1: Throne of Treachery focuses on the development of the schism between the Yorks and the Lancasters after Henry VI inherits the throne. In Crusade of Chaos, the violence spreads beyond the two families involved. The play shows how the ambition and greed of a few elites infects the English population, and seeps into the moral fabric of the country.

The play opens with a peasant revolt led by John Cade, a charismatic commoner who has been manipulated by the Duke of York to make a grab for the throne. The peasants are so uneducated they consider anyone who can write their name an out-of-touch elite, and are wooed by the promise of free bread for all. The crown wins the mob over by threatening them and promising they’d be better paid fighting in France. However, King Henry recognizes the revolt as a manifestation of more serious problems, and vows to learn “to rule better.” It’s a pretty progressive move for a feudal monarch, but, unfortunately, that’s not how this play or period of English history works out. 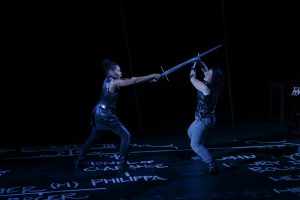 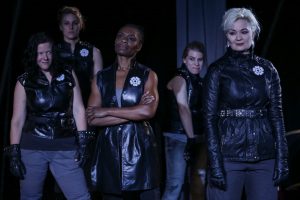 When faced with another revolt, this time from his rival for the throne, Henry makes a compromise to prevent further bloodshed. But in such a high-stakes, “death or dignity” political system, the peace doesn’t last long. The War of the Roses begins in earnest. Vengeance and betrayal abound, and with every advancement each side makes, we see how they play a seed of their own destruction. A king celebrates victory at the end of the play, but it’s clear the cycle of scheming and violence will continue.

Bring Down the House, Part 2 once again features strong direction from co-writer Rosa Joshi, and a skilled, all-female ensemble. Some of the sixteen actresses reprise their characters from Part 1, but most take on new roles. Betsy Schwartz really gets to shine as King Henry in this play, in which her character is a beacon of morality and empathy in an increasingly vicious world. Kate Wisniewski and Mari Nelson are still wonderful in their respective roles as the ruthless Queen Margaret and ambitious York. Nike Imoru’s Warwick, a warrior with a strong sense of honor, is another standout recurring character.

Of the new characters, Peggy Gannon stands out as both rabble-rouser John Cade (part Trump, part Trujillo, part accidental Marx) and lascivious brute Edward of York. Yadira Duarte inspires fear and pity as Young Clifford, on a mission to avenge his father’s murder. Sarah Harlett’s performance as the cunning, deformed Richard (not yet “the third”) is bold and nuanced, worthy of helming that character’s namesake play.

Like in Part 1, the technical aspects of Crusade of Chaos enhance the production for the most part, but are not without weaknesses. William Satake Blauvelt’s score, especially the prominent taiko drumming, is 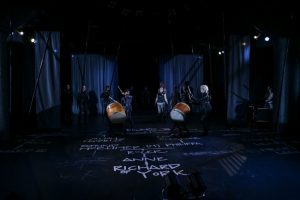 The fight and movement choreography is less consistent, but when it works, it really works. The one-on-one swordfights are impressive and exciting. In a consistently violent play, many deaths manage to be both disturbing and unique. The quality of the script, performances, and choreography prevents the audience from becoming desensitized. However, the dance-influenced choreography of the big battles saps the play of tension. These more abstract fight scenes just don’t have the same weight as the duels and murders. The sloppy execution of the choreography in the show I saw didn’t help things, and made me wonder if some of this had been recently added or changed. Bring Down the House clears most of the hurdles of making classic theater exciting for the present-day audience, but it noticeably stumbles at these battle scenes.

Overall, Bring Down the House, Part 2: Crusade of Chaos is just as exciting and insightful as Part 1. The engaging script, strong performances, and inventive production bring Shakespeare’s depiction of this fascinating period of English history to life, while raising moral and political questions still relevant today. I highly recommend getting out to see both epic parts.