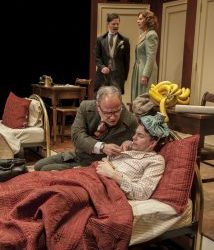 Room Service first hit Broadway in 1937, in the midst of our country’s long dark Depression. The Marx Brothers took the play’s script, written by John Murray and Allen Boretz and made it into a movie the following year. It was their only film not specifically created for them. Although there are lots of wacky shenanigans in the Taproot’s production, don’t expect to see specific Groucho and Harpo bits here. Director Karen Lund has her own original take on the comedic madness.

The basic setup involves a shady theater troupe that has run short of money and is desperately hanging out at a Manhattan hotel hoping to survive until they can get their original production of “Godspeed” on its feet with the financial aid of a reliable backer. Bills are piling up and the actors employ all sorts of devious plots to somehow stay in their lodging.

Daniel Stoltenberg shines as the droll director of the show, taking in all the craziness of the company’s plight with a tired shrug and a batch of hilarious one-liners. The production really kicks into gear when Christopher Morson enters, as the play’s author, Leo Davis. Leo is fresh off the bus from Oswego, New York and is more than a little wet behind the ears, but he is a fast learner and soon is right on board, joining in with the troupe’s antics. His fake death scene, required to help keep the bill collectors and house detectives away, is one of the highlights of the play. Laura Lee Caudill makes for a delightful ingénue, eventually pairing off with the young playwright.

Taproot veteran Bill Johns does quadruple duty, taking on a variety of roles, ranging from the ambitious waiter/wannabe actor Sasha Smirnoff, to the dignified Senator Blake who arrives to save the day. Dialect Coach Benjamin Wippel has all of the casts’ lines sounding just right to this ear.

In her notes, Lund points out that no amount of craziness can stop these comedic characters from going after their dreams. “For them it is a serious quest. For those of us watching them, it is pure joy.” A play like Room Service must have been so welcome in the late thirties when millions of Americans were worrying about how they could pay all of their bills. Seeing these madcap heroes succeed must have provided a bit of soothing balm to the original show’s audiences. And despite how silly some of the plot’s machinations may appear to 2017 viewers, who isn’t in need of a good ol’ laugh today? Let the silliness reign!

Room Service runs until March 4 at the Taproot Theatre Company’s Jewell Mainstage Theatre at 204 N85th Street, right in the heart of Greenwood. Tickets are on sale online at www.taproottheatre.org or by phone at 206.781.9707.