Seattle Musical Theatre delivers an enlightening production about family, loyalty and finding purpose in this world in Little Women the Musical. It is the third of four productions in Seattle Musical theatre’s 39th season, playing at their venue in Magnuson Park. This musical will transport you back to your childhood and dreary days made adventurous by reading Louisa May Alcott’s novel. Each member of the troupe managed to embrace the attributes of their characters and mirror the tone of the novel.

The musical opens with Jo (Danielle Barnum), the second oldest of four daughters in the March family, dramatically reading the contents of her latest story to Professor Bhaer (Shane Patrick Hoffman). After receiving criticism about the copious amount of “blood and guts” in her story, Jo makes a pact to herself to become “better.” Thus begins Jo’s search for an identity and a sense of purpose in a world that seems far from suited for her. In the midst of the Civil War era, her tomboyish and passionate ways do not ascribe to the standards for women.

In the following scene, the March sisters – Jo, Beth (Sarah Fairchild), Meg (Alyssa Maas), and Amy (Carly Squires Hutchison) – plan an elaborate Christmas play to alleviate the sorrow of their father’s absence during the holiday. The identity of the four sisters is rooted in family, kinship and sticking together as they sing and dance merrily together with whimsical choreography by Andrew Coopman. The interactions between the sisters induce giggles and a sense of admiration. Marmee (Shoshauna Mohlman), the girls’ mother, encourages them to pursue their dreams before performing a heart-breaking solo as she laments her husband’s absence during the war. 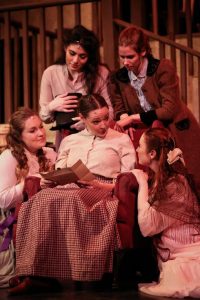 The whimsical joys of family are juxtaposed by Aunt March (Dawn Brazel) and her expectations that Jo become a respectable woman of society. Jo acquiesces to leave her spunk behind in the hope that Aunt March will take her on a voyage to Europe, which, according to Jo, is essential for a writer’s development.

A series of betrayals occur that bring Jo’s identity into question. Meg becomes engaged and Jo’s vision of her sisters being together forever is dashed. Following that, Laurie (David Connolly), Jo’s best friend and adventure buddy, asks for her hand in marriage. Jo views this as a breach of trust within their friendship.

As Act One comes to a close, we are left wondering if Jo will find purpose in a world seemingly unfit for her dreams and desires of becoming an author while managing societal expectations. Relationships between characters are tense, but the hope that familial bond will prevail is eminent. In the theme of Seattle Musical Theatre’s 39th season, see Little Women the Musical to find out how the March sisters’ identity is discovered.