“Do you think forwards or backwards or somewhere in the present?”

All three, Bright Half Life answers for the audience gathered at 12TH Ave Arts intimate space on Capitol Hill. The 80-minute non-stop whirlwind play takes you through the relationship of Erika (Rhonda J. Soikowski, theater faculty at Cornish College of the Arts) and Vicky (Tracy Michelle Hughes, long time Equity actor in Seattle) in a series of colliding, non-sequential vignettes. The stage, a sculptural combination of platforms and steps of different dimensions, becomes the bare canvas for the brightest and darkest moments of the relationship. Vicky and Erica take us through a journey exploring race, gender, class, and modernity through a fraught and rewarding fight for love. A light installation with too many fixtures to count flickers and pulses with the energy of the scenes. At times seeing highlight after highlight of the tumultuous, universal relationship becomes a bit blinding. I found myself looking for a quiet moment to breathe.

The play itself is written by Pacific Northwest native Tanya Barfield, whose plays have earned critical acclaim from institutions like The New York Times, and currently writes for the silver screen. Directed by HATLO, a “collaborative queer theater artist who creates and facilitates new performance,” Bright Half Life certainly brought something new to the stage. Soikowski mentioned in a Q&A after the show that she had declined other roles in order to see a character she deeply identified with performed for the first time. 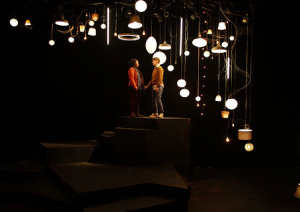 Somehow the two of them manage to make the stage look small, the complexities of the characters expanding into the space. The symbolic and fast-paced blocking, matched with cutting and intuitive dialogue, creates a sort of captivating dance on stage. Some clunky moments in the script are saved by thoughtful characterization and playful humor. Recommended for those interested in seeing, as an audience member put it after the show, an LGBTQ relationship universalized on stage.

Read other reviews by Jessica McQuarrie