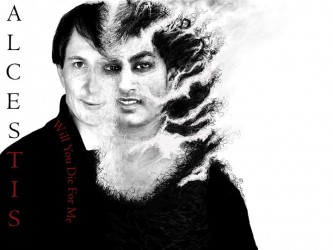 Alcestis probably isn’t one of the Greek classics you had to read in school, but it has a similar history to the better-known contemporaries. It was first performed at the City Dionysia festival, the annual Greek theatre competition and Dionysus-worshiping festival, in 438 B.C, where it won second place. It is the oldest play by Euripides, author of the more famous Medea, Electra, and Bacchae, that survives today. Alcestis’s tragicomic elements and lack of violence set it apart from other plays of its era, and the IRB cleverly emphasizes those aspects in its production.

Cameron’s modern adaption brings this tale of fate and the gods down to earth. Marie Bolla gives a dignified, compelling performance as the titular self-sacrificing queen. Apollo (Aaron Moore) and Death (Isis Phoenix) display the catty, self-interested side of the Greek gods and their interactions that are often the most fun parts of their mythology. Their arguing and meddling moments are clear highlights of the play. David Cravens-O’Farrell as a knuckle-headed but heroic Heracles and Ian Gerrard as deadbeat royal dad Pheres are also sure to be audience favorites. The adaption’s dialogue is clunky at times (Did the euphemism “kicked it” really need to be used so much?), but the cast’s enthusiasm makes up for it.

The show is clearly low-budget, but the production team makes the most of what they have. The surprising use of puppetry alone is a reason to see this show. Scenic designer Morgan Sobel and costume designer Sonya Hachez put in creative, enjoyable work. Robert Falk’s lighting and Mon Sucre’s music are also interesting and effective additions.

I recommend this production of Alcestis to anyone looking to expand their experience of the ancient Greek classics, support up-and-coming theatre artists, or just be entertained.  It’s guaranteed to be a weird and fun night at the theatre.