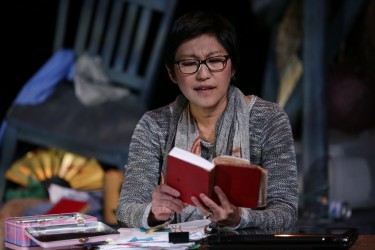 A Book for the Time Being is a 422 page novel by Ruth Ozeki published in 2013. I, Mark, have not read it (Alan has), so the deletion choices made by Laura Ferri to adapt it for Book-It and director Desdemona Chiang are lost to me. In the 2 hours and 40 minutes of the text this amazing company kept in play; they packed a lot in on topics such as: online and physical bullying, loneliness, depression, suicide across generations, Buddhism, dementia, environmental pollution, animal familiars, and (in passing) quantum physics! NPR’s interview with Ozeki provides an overview of the writer and the origins of this book. It was indeed a Herculean task to bring this unwieldy novel to the stage. Chiang and Ferri pull it off with aplomb.

Director Desdemona Chiang is a genius. She is currently experiencing the flowering of her career and has a devoted fan base. She is fresh from her outstanding work in Ashland at the Oregon Shakespeare Festival where she set The Winter’s Tale in dynastic China and the American Old West. Chiang brings the same intense creativity to this production.

Scenic Designer Catherine Cornell and Chiang made a set that flows and appears and disappears quickly for scene changes, like it was placed on top of water. They help evoke a shoreline with ripples painted on the stage floor. Clearly they leaned on the expertise of Lada Vishtak, a Japanese culture consultant. They also went one better, on the Japanese design feature of sliding doors: they used rolling platforms as well with tatami surfaces. In combination at several times this gives a scene a movie-like quality. For example, one scene had a character standing on a rolling platform as it was being rotated, giving the impression of a dolly shot from a circular track. In another, a character spoke as he was being wheeled off stage as the rear lights were dimmed giving the impression of a both a zoom out and a fade out.

Whose story is Ozeki telling? Mainly it’s centered on two people: Nao (pronounced Now) and Ruth (closely based on the novelist). Mi Kang and Marika Kita in these roles draw you into their struggles, Nao’s challenge is to find solace by keeping a secret diary she hides inside a gutted and repurposed copy of Proust’s In Search of Lost Time (À la Recherche du Temps Perdu, also translated as Remembrance of Things Past). Ruth collects the diary when it washes up in British Columbia. As Japaneses gifts often are, it is carefully wrapped and easily survived the journey from Japan across the ocean. The book and play offer several theories about how that happened.

Lights up and we face Nao, center stage, directly addressing the audience. She’s in eighth grade and her happy world in California. Her father (Haruki #2, played by Scott Koh) is working in the early 2000s as a software engineer during the dot com boom times. The impersonal violence of the stock market collapse disrupts everything: Haruki loses his job and is forced to return with the family to a crummy apartment with thin walls in Japan.

Her folks enrolls Nao mid-year in a public school. Nao is older than her classmates, doesn’t speak Japanese as well, and though ethnically Japanese she is culturally an American teenager. She’s bullied with increasing levels of humiliation and violence. One of their cruelest stunts is to treat her as invisible, as a ghost, and the bullies even get a substitute teacher in on the abuse. She finds the diary in a street market and decides that her tormentors would never guess her diary is inside.

We know this because Ruth gets hooked and interrupts the work on her memoir to read the diary and research translations and references. Google is a time sink. Early on Nao confesses that she’s keeping this diary as a record of her life leading up to her suicide.

It took Alan a while to accept Mi Kang as the young Nao. Her character in the novel is a fascinating blend of irreverence, vulnerability and inner strength. No actor can get all that at once. But Mi Kang, a recent graduate from The University of Texas, is more than up for the challenge. Her coming of age story, growing up amid unimaginable hardships is  breathtaking to behold.

Mariko Kita’s Ruth, is a much less flashy role, but she too does outstanding work. Watching the effects of the young girl’s tale on the older writer’s life becomes one of the larger focuses of this production.

Khanh Doan, as Jiko—Nao’s grandmother and also role model, Buddhist monk & martial arts mentor—provides Nao with the love and guidance missing from her busy mom and suicidal dad. When Nao is forced to visit Jiko over one summer, Jiko builds an altar for her son, Haruki #1, who was drafted into the Japanese Air Force during the later stages of World War II. This is the Bon Festival, which is celebrated mid-summer and has both Buddhist and Shinto elements. During this festival people pray for the souls of their ancestors and the ghosts of the ancestors are believed to return to see how the living are faring.

Haruki #1 suffers brutal training to be a forced into being a kamikaze pilot. He writes his mother letters that lie about his upcoming glorious death in service to Japan and the Emperor while keeping a secret diary written in French. Somehow, this diary is included with Nao’s ocean-traveling package. Nao sneaks into the altar and meets Haruki’s ghost, which gives her an even stronger sense of her roots. It also reinforces the themes of suicide and secret diaries.

Returning home from her visit to Jiko, Nao resolves to kill herself, too. Suffice it say that reading this in the diary ramps up Ruth’s concern, though by the time Ruth read this in the diary it is—perhaps—already too late to do much about it.

Tale for the Time Being by Ruth Ozeki, adapted by Laura Ferri & directed by Desdemona Chiang. Runtime: 2 hrs 40 min, with 1 intermission. Book-It Repertory Theatre, The Center Theatre at the Armory, 305 Harrison St, Seattle Center. Tickets and information at book-it.org or 206-216-0833. Runs Sept 14 – Oct 9.