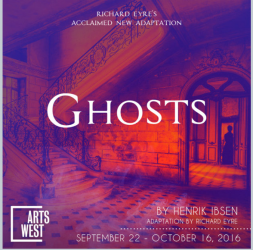 “We don’t have the right to expect happiness.”

Nor should you, if you’re going to see Richard Eyre’s adaptation of Ghosts by Henrik Ibsen. Noah Racey delivers this line as the moralizing Pastor Manders, as he advises the widow Helene Alving played by Suzanna Bouchard on what turns out to be a very bad day.

This period drama gives real insight into the kind of issues the 19th century upper-middle class dealt with around family, duty, religion, and the ever-present need to do “what’s right.” Though ghosts do not actually appear in this production, their presence is felt through the excellent lighting and sound effects delivered by Alyssa Milione and Wills.

Supernatural themes are common throughout Henrik Ibsen’s works, and his characters are often plagued by trolls in plots as dark as his native Norwegian winters. This adaptation by Richard Eyre makes the 19th century references and language perfectly comprehensible to a modern audience, and the directing by Matthew Wright deftly places you in the parlor with the characters, in the challenging theatre-in-the-round. Excellent set design by Shawn Ketchum Johnson adds to the feeling that you’re sitting on a sofa in a Victorian household, watching the drama unfold.

Ghosts is an intense start to the season for Arts West, and is an entertaining if somewhat depressing period piece, that is haunted by “dead ideas, dead customs, and dead morals,” as Helene Alving puts it.

Milk Like Sugar at ArtsWest review
March 5, 2017
© 2021 Drama in the Hood. All rights reserved.
Site Design