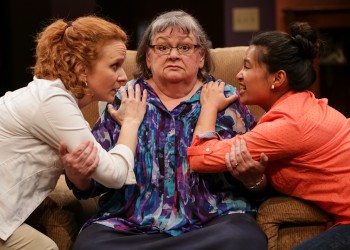 The Realization of Emily Linder opened at Taproot Theatre May 11. Written by Richard Strand and directed by Nathan Kessler-Jeffrey, the thought-provoking play told quippy jokes and asked raw questions.

The protagonist Emily Linder, portrayed by Laura Kenny, is a harsh, caustic, senile old woman who gathers her two daughters together to tell them that she’s predicted the day of her death— that it’s two days from now— and that she would like them to tend to her list of funeral errands, which are almost all ridiculous if not impossible.

The scene is set. An old mother. Two adult daughters. In a living room. With another woman, who we aren’t sure who she really is, silently sitting and reading for a majority of the first act of the show. The play had a sitcomy humor to it at first— the set remained in the living room if Emily’s house and never moved, which matched Emily who almost never moves either after having just had all of her toes amputated.

We meet Margaret, portrayed by Charity Parenzini, who is a sweet wife, mom and daughter who consistently feels inadequate and incompetent. Her sister Janet is her foil— a big-shot lawyer in Chicago who walks around the stage almost antsily, with a commanding presence, pointing at people when she talks to them, constantly checking her phone.

When Jennifer, a sharp-as-a-tack caretaker portrayed by Annelih GH Hamilton jumped into the play, it felt like a breath of new life was breathed into a performance that was beginning to feel claustrophobic. The pace was switched up and as an audience member, I welcomed the new character with open arms.

The play didn’t shy away from the complexities of family dynamics, the ugly side of old age and the vulnerability of confronting your own mortality. This play will make you crack up, make you tear up, and most importantly: it will make you call your mom.