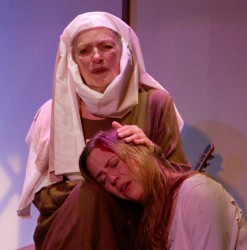 The Devil is in the Details

The correlation between religious mysticism and mental illness is a fascinating subject but not always a welcome one in certain religious communities. Creature, by Heidi Schreck, which opened at Theater Schmeater this weekend, provided a platform to discuss these issues, as it recounted the “post-partum depression/mystical religious experiences” of Magery Kempe , a late medieval English Christian mystic.

Mrs. Kempe wrote ( as in dictated as she was illiterate) The Book of Margery Kempe, what is considered the first autobiography in the English language sometime after 1433, although some would consider it a “confession of faith.”

Although seven pages of the original manuscript were published in a pamphlet in 1501, the full manuscript had been lost until 1934, when it was discovered in a private home in the North of England.

Written in the third person, Mrs. Kempe refers to herself as “Creature”, and describes her spiritual struggles, her extensive pilgrimages to the Holy Land as well as the life as a well-off provincial middle class woman and successful brewer. ( NB  her father was the Mayor of an East Anglican town called Lyn in the play, now King’s Lyn and a relative was an M.P in Parliament)

Linguistically, the date when Mrs. Kempe “wrote” is highly significant as it was only 50 years after Geoffrey Chaucer wrote The Canterbury Tales, the first important work to be written in English rather than French, by a well-educated court official.

Historically, she lived and wrote in religiously turbulent times about 100 years before Luther’s successful Reformation of the Catholic Church, but prior to that which made Luther’s movement successful: the invention of moveable type and the printing press.

Specifically in 1428, the unsuccessful precursor to Luther, John Wycliffe, an Oxford University theologian,  was posthumously condemned as a heretic and his English followers, the Lollards were brutally suppressed.  Also during her lifetime, in the Holy Roman Empire, Jan Hus, another ordained theologian and follower of John Wycliffe, was burned at the stake for heresy in 1415.  All these religious conflicts provided the background for Margery’s spiritual struggles.

The plot was rambling, historically inaccurate, unfocused, fairly incoherent and veered off in too many directions. A too modern dialogue with irreverent attitudes towards religion gave the audience the impression that the play was an extended Monty Python sketch.

The script also needed some serious cuts as it lasted 2 ½ hours.  If one is going to write about pre-Vatican II Catholicism, it would have been wise to get any Catholic to read the script before publication, just to clean up the wording of how to start a confession and whether any priest EVER lived with their mothers after taking their vows.

A capable cast was assembled to perform a highly flawed script:   Ruth McRee as Juliana of Norwich, another female Christian mystic and theologian, who appears both in the book and the play, Adam St. John as Mr. John Kempe, Abbey Nathan as the Nurse and Allison Yolo as Margery.   Unfortunately, they did not appear at their best in this play.

It did not appear that very much care was taken with the set and props, as the set also had historical inaccuracies, and suggested a modern Japanese style interior. All these things prevented me from believing what was happening on stage.

After sitting through the first part and well into the second part, finally there were three scenes worth watching and I stopped noticing the externals, because the actors finally were able to connect with the reality of their character’s emotions, prior to that they had been directed so poorly that everything fell flat.

Later, after researching the production history, I discovered that the play, was described as a comedy.  One of the fundamental rules for comedy was totally disregarded:  that is, comedy only works if there is a connection to life’s tragedy; and what is more tragic than a mother rejecting her first-born?

Instead, Allison Yolo as Margery Kempe, who demonstrated her talent and sensitivity in the last two scenes, was directed to trivialize the subject matter with flippancy and hammy acting by the director, Emily Harvey. The script was not perfect but the manner in which it was directed emphasized the substantial flaws, as did the set, props and costumes.

Although the audience was not large, a few people laughed at some of the appropriate places. In my opinion, a serious subject was introduced but given short shrift.  Nowadays, we know that many of the “visions” saints and mystics experience are, in fact, schizophrenic hallucinations.  This connection was buried beneath the silliness and superficiality of the script.

Conversely, we also know that severe mental anguish causes people to reach some sort of enlightenment and that however much we reject fundamentalist religion that, a spiritual path can help the mentally ill. Medically, we know a lot about post-partum depression-just ask Brook Shields.   I was no more enlightened about these issues, about Christian mysticism, nor did I get the impression that Magery Kempe was particularly enlightened.

I would not recommend this play for anyone who finds it distressing to see capable actors directed badly, who was raised Catholic before the Vatican II reforms, who knows anything about European History of the late Middle Ages, or the Reformation, or when witch trials actually took place in Europe.   As they say The Devil is in the Details, and it sure was in this production.