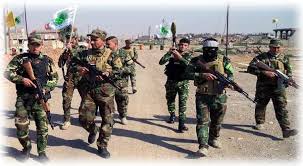 It is difficult to find the words to express how great 9 Circles was!!!!!. Playing at 12th Ave Arts, produced by Strawberry Theatre Workshop, directed by Grey Carter, from a divinely inspired script by Father Bill Cain, S.J., with an exceptionally stellar cast, it was far more than just a good show. It was a spiritually uplifting EXPERIENCE which one rarely has in theatre or indeed in life.

It has been said, that the ultimate test of compassion is if you can “love” Hitler, meaning that if you can feel compassion for such an evil person, then you are capable of the ultimate form of human compassion. The Roman Catholic Church especially preaches forgiveness in all cases, and opposes the death penalty. Playwright Bill Cain (a Jesuit priest) bases 9 Circles on a modern-day perpetrator of combat, rather than administrative, war crimes.

The case of  Pfc Steven Dale Green, who was convicted in a Federal Court in 2009 for combat “war-crimes” in Iraq, provided the content of this enthralling play. The character in the play, Pfce Daniel Edward Reeves, had a full-blown personality disorder-a sociopath-that is to say someone, who can not feel empathy for his fellow human beings. Like Hitler, he loved being in the Army, like Hitler he felt the most connection to his fellow man within that intense fraternity and again like Hitler it was during a war that he felt the most well-adjusted.

Structurally, 9 Circles, is based on the Inferno, the first part of Dante’s Divine Comedy,  the 14th Century Epic Poem representing the journey of the soul toward God. The Inferno describes the recognition and rejection of sin. Like the Inferno, there are nine scenes or interviews as the character, Pfc Daniel Edward Reeves, ( based on Green) goes through both the external journey of being discharged from the army and its subsequent aftermath as well as an internal journey towards salvation.

Green’s statement “I was made to pay for all the war crimes” is topical, since the very week the play opened, a big controversy was raging in Viet-Nam, over whether former Governor Bob Kerrey should be appointed president of the American funded Fulbright University in Viet-Nam.   Fifteen years ago, Kerrey admitted not only to similar war-crimes, as a Navy Seal, in Viet-Nam in 1969 but also to falsifying the report ( stating that instead of killing 20 civilians-including 13 children and a pregnant women-that they had killed 21 Viet Cong guerillas.) For this he was awarded a Bronze Star, and came home a hero. Needless to say, he did not stand trial, nor go to jail.

In Viet-Nam one side argues, that it is insensitive to have appointed Kerrey as president of this university.   Another side argues that  Kerrey’s actions have indicated a sincere desire to help the Viet-Namese; therefore they should forgive him.   N.B. Gov. Kerrey has been instrumental in fund-raising for this university.

Throughout the 9 Circles, the playwright kept us in suspense. Knowing nothing about the play beforehand, I actually was not certain, whether Reeves had actually committed the crimes, for which he was accused. Quite often, I suspected that his particular pathology was just that he liked to plead guilty, either for shock value or because he suffered from the same social incompetence as Sheldon Cooper in TV’s the Big Bang Theory.

In spite of the seriousness of the subject matter, the play had just enough comic relief to make it watchable. The exquisitely witty yet profound dialogue had all the absurdist zing of Catch-22 by Joseph Heller.   In his non-explosive moments, Reeves was a re-incarnation of Yossarian. The utter absurdity of war, his guilt, the army’s guilt, all came through with astute wisdom.

Conner Neddersen delivered an exceptional performance as Pfc Reeves, it was tour-de-force acting as he was in every scene, with major-league physical and vocal demands. His Texas accent was spot-on, while being totally convincing as a socio-path, who milked the script for every bit of humor available. Particularly amusing was his well-brought up Southern gentleman manners around a female Army psychiatrist.

The other three actors played numerous characters so well, that some of them I didn’t realize were being double cast. Norah Elges played a public defender, a prosecutor and a hard-boiled Army psychiatrist.   In all three roles she was brilliant, but particularly so as the Army psychiatrist, who walks a thin line between honesty and court-martial. Her performance added a lot to the surrealist aspect of the show and she handled the wit with panache.

As the Lieutenant and later the Defense Attorney, Sam Hagen differentiated the characters amazingly well. As the Lieutenant, he expressed all the frustration imaginable in having to deal with a verbally tap-dancing lunatic, who refuses an Honorable Discharge, when he should have been court-martialed.   As the defense attorney, he has all the lawyerly slim, we have all grown to despise, but underneath it all, he demonstrated compassion for his client and went to bat for him.

Sylvester Kamara played an Army Attorney who cleverly schemes to save Reeves from the death penalty as well as a sympathetic but highly weird pastor with a sincere desire to help Reeves. In both roles he exuded compassion, and but also amused the audience.

Of course, even with such an accomplished cast, this play was not easy to direct, it needed an exceptionally able director to bring the subtleties to the stage. Greg Carter, Artistic Director of Strawberry Theatre Workshop, was more than up to the task. There was impeccable timing, just the right balance between gallows humor and profound discussions of serious subjects. In addition, the audience could see and hear from everywhere in the end-the-round staging.

Although the pre-show music was not to my taste, being, in my opinion, repulsive violent Rap music, it nevertheless reflected the inner monologue of Pfc Reeves, who freely admits that he wants to kill everyone. I would warn people to slip into your seat right before the lights go out, if that sort of “music” starts making you want to kill people.

Even though this play opened at an inopportune time; during the SIFF festival and during a heat-wave, when it is not easy to sit indoors, it would be a very good idea to go see this play. Only two other plays in the last six years have had such a powerful effect on me; they were Azerotrop’s production of Jesus Hopped the “A” Train by Stephen Audley Guirgis, and Taproot’s Production of The Whipping Man by Matthew Lopez. ( They are what we at Drama in the Hood call Triple Crown winners: Great Script, Great Direction and Great Cast)

Father Cain can count me as one of his successes, at the end of this play, among other things, I felt nothing but compassion for Pfc, Reeves. I also felt a lot of other things, about the people who have perpetuated this useless violence. The example of Viet-Nam is relevant. Amidst protest after protest after protest, we heard excuse after excuse after excuse about why we had to keep fighting; now only forty-one years later, we are wooing Viet-Nam as an ally. Why did we ever fight? Why are we fighting now?