The Mystery of Love & Sex Dances into the ACT 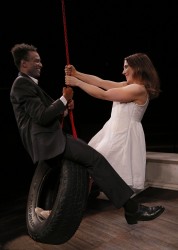 Playwright Bathsheba Doran is on a roll; she’s been collecting awards while writing scripts for TV’s Masters of Sex, Smash and Boardwalk Empire as well as a set of successful Broadway shows. The Mystery of Love & Sex opened at the Lincoln Center last year in New York and now has landed with a marvelous staging here at Seattle’s ACT. The show features a playwright in total command of her work, hitting on all cylinders.

Two couples are featured in the story line. Johnny (Lorenzo Roberts) and Charlotte (Emily Chisholm) are life-long best friends sharing a dorm room in an unnamed Southern university. Johnny is a conservative African-American Baptist and Charlotte is a white Jewish/Catholic girl more ready to take some chances with her life. They are visited in their room by Charlotte’s parents Howard (Ray Abruzzo) a published mystery writer and Lucinda (Mary Kae Irvin). Early scenes are filled with one-liners built on the vastly different characters’ worlds of the suburbs and the college campus. Charlotte’s parents obligingly sit on the floor and eat salad and bread served enthusiastically by the college kids. The rhythms here are not unlike a solid Neil Simon play with lots of humor organically emerging from a nuanced character conflict. But what is to later ensue would have Oscar and Felix flat out drop their jaws.

Once Charlotte’s parents depart, the young couple explores what it means to have a best friend of the opposite sex. Both are fed up with false pretences and people “opening and closing their mouths and …saying nothing.” The two kids are bright enough to be aware that the available options and varieties of dating and sex today are mindboggling and somewhat frightening. Until now, Doran had avoided writing about gay characters, but noted in an interview, “The play burst out of me. I’d thought the moment for characters struggling with their sexuality had passed. Well, turns out it hasn’t. We still live in a world of resentment and hatred.” All four characters must face their prejudices and confusion over what it means to be a sexual being in 2016.

Act II occurs five years later and people grow up. Doran requests no spoilers citing the word “mystery” in the play’s title. Suffice it to say each character learns something new about themselves and their world. Dancing is a major motif of the work and all four will somehow find their own unique steps by the final curtain.

Director Allison Narver has her cast do some dazzling work. As the younger pair, Roberts and Chisholm have a genuine chemistry as they explore how “hate and love are totally connected” in their unique friendship. Chisholm has been a regular on Seattle stages for some time now and this is the best work I’ve seen her do. Abruzzo avoids all the clichés playing the overbearing Jewish father and offers a moving portrait of a man just trying to make the right choices on a swiftly changing playing field. Irvin offers some very touching moments attempting to offer both children a loving haven while her own world begins to splinter.

Matthew Smucker put the scenic design together; the staging seamlessly moves from a campus room to a suburban home and its backyard. Most notably a stately old tree with a tire swing will provide the setting for a breathtaking scene illustrating the importance of genuine friendship.

The talented Doran has assembled a stunning play that touches upon so many essential truths about modern life, family, and yes…love and sex while never ceasing to entertain us. The show runs through June 26 at the ACT’s Allen Theatre (700 Union Street, Seattle.) For ticket information go to www.acttheatre.org or call 206.292.7676