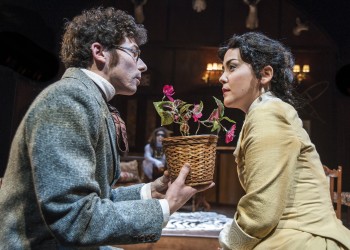 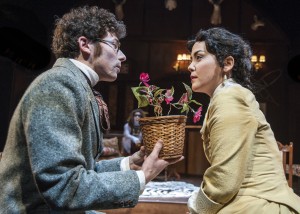 The Explorers Club, a comedy about the London Explorers Club of 1879, opened last weekend at Taproot Theatre. Directed by Karen Lund, the hillarious play was the highlight of my weekend as I enjoyed the nice balance of cheeky British humor and silly, slapstick American humor. There are quips, jokes, one-liners and physical humor that appeal to all senses of humors, and had me chuckling the whole ride home from the theatre: “Women have all of these little whims…. That’s why we call them ‘women.'”
The set was gorgeous and intricate— a rustic men’s club, filled with antlers, exotic fur rugs, animal figurines and other rustic knick knacks. It established the feeling that all good sets do— that each audience member is simply a fly on the wall, eavesdropping on the events of the play as they unfold.
The premise of the play was that for the first time ever, a female (Phyllida Spotte-Hume played by Hana Lass) was nominated for membership within this famous London Explorer’s Club, filled with essentially hardly grown-up versions of boys who lack the brains and bravado that they think they have for the theories they think of and the expeditions they go on.
Though the play set up the expectation that it would be a feminist piece exploring gender equality, the female’s membership nomination was a background thought, and Phyllida had little stage time, which I was disappointed with. Phyllida is an explorer and scientist who is clearly the most accomplished explorer, of all the characters. She spends months studying a tribe thought to be long gone, and ends up bring a tribe member back. The tribe member (think Smurf + Oompa Loompa + Danny DeVito) hilariously portrayed by Bill Johns, dominated much more of the story than Phyllida’s character does. The play did poke fun at traditional masculinity dozens of times, which was humorous, and allowed for the celebration of the feminist movement to manifest itself in more of a subtle way: yes, Phyllida is inarguable more impressive and intelligent than the members of the Explorers Club, yet she isn’t allowed admittance at first because of her “inferior sex.” This is, of course, much more of a critique of the writing by Nell Benjamin than of the actual production by Taproot Theatre. Though the play didn’t quite scratch the girl power itch I had, I found the play laugh-out-loud funny and enjoyed every minute of it.
Lovelorn botanist Lucius Fretway, played by Conner Neddersen, will completely capture your heart and make you want to devote your life to studying obscure plants. His standout performance was driven by the strength of his adorkable, sheepish countenance. Equal to his performance was Hana Lass, who portrayed Phyllida, with the strength, smarts, and elegance that every woman wants to embody. The only criticism I can offer to the actors, is to pay more careful attention to leaving more pauses between lines. The loud laughter from the audience often seemed to muffle some succeeding lines. Having an audience laughing hysterically is a good problem to have, though, I’d say.
One of my favorite scenes was when Phyllida is kicked out of the club, so that the men can enjoy brandy and cigars, which one of the explorers describes as a “sacred time.” Before they take their first sip of their brandy, they raise their glasses and one of them toasts, “Science is the great equalizer.” Indeed, gentleman. I’ll drink to that.