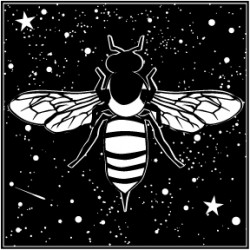 Humble Boy opened Friday January 30th, at the Bathhouse Theater. The comedic play by Charlotte Jones about a son, black holes, and relationships. A morbid but hysterical portrayal of the after effects of death. Felix, played by Jason Morr, is a boy/man struggling to cope with his father’s death. Unsure of the words to express his feelings Felix is stumbling through the summer in the garden at his family’s estate. “An apocalypse of beekeepers”, the ironic phrase that Felix coins at the beginning of the play shows us the quirky and intelligent side of him. A thesaurus would be helpful in the first few minutes of the play. Realizing that words- the correct words- are of utmost importance throughout the entire story.

Greenery, rose bushes, planter boxes, a beehive, and a green grass floor set the scene of the Humble family garden, where the entire play takes place. Flora, the patriarch of the family, seems to rule with an iron fist. Macall Gordon plays Flora, her vintage flare and formal style set the tone for Flora and Felix’s relationship. Mention of a nose job adds to the air of vanity that Flora exudes. She is unable to stop and smell the roses, literally and figuratively, she is so consumed with her own life that Flora misunderstands her son’s grief for stubbornness.
Felix is a troubled young scientist, lost in his world of space, stars, and black holes. His stuttering over the letter “B” is a bit too ironic, his late father had a love of bees and died as a result. Felix struggles to converse with his mother over the simplest of things, showing a frustration with her inability to understand him on a deeper level. Gordon’s portrayal of Flora is reminiscent of a reticent Lucille Ball on “I love Lucy”, she has comedic timing, poise and a flare for the dramatic.

Rosie, the girlfriend from long ago re-enters Felix’s life seemingly the hope he needs to move on, say goodbye to his father, and continue with this cosmology studying. Rosie, played by Alyssa Keene, is a feisty character that fights the surface of her relationship with Felix. Rosie’s brash nature and vulgar language make her a character that you want to hate, but can’t help but love. Kane’s performance with a silver tongue and sincere nature make Rosie a sharp match for Morr’s shy, nervous, and humble Felix.
The scientific verisimilitude Jones gives the play makes you think about black holes, the stars, space, string theory, and how small people really are in the chain of being. Like James, Felix’s father in the play, we all return to dust. For James his ashes end up in a honey pot urn. In a comedic array of events that we all wish would never happen to our loved ones remains, James is used as a urinal, seasoning spice, and a source of contention. With eerie visits from James throughout the play, we get a sense of the cryptic biologist that he was. James is a rambling gardener that is as distant in the afterlife as he was while alive.

After a morbid dinner party, where all the guests describe how they would commit suicide, Felix and Flora have a row, with Flora delivering a monologue. She eloquently states that as we grow older, have a family, and change our dreams to accommodate said family, “You are no longer the heroine of your own life.” The sad reality of a family that perpetually misunderstood each other comes to light. Bringing the play to a close is a bonding moment with Felix and Flora finally having a moment of realization and shared love.

The cast gave an emotional and hysterical performance, with off color jokes, vulgar language and suggestive body language; the display of grief after death and how we all cope differently makes this play feel more like a live retelling of your crazy family’s experiences.