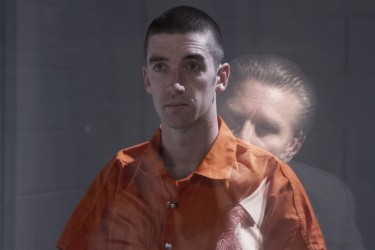 Terre Haute by Edmund White opened Friday, May 16 at ACT Theatre on one of their intimate stages. Veteran Director Aaron Levin brings military precision to White’s fictional meeting between the Oklahoma City bomber and a famous ex-patriot social critic. What are their motives? Do they share common ground? White’s script plunges right in and allows answers, and more questions, to surface. The leads are the show and we believe their performances.

If you know or look up the story, there are no surprise endings, yet simply through the tension of two people attempting to understand one another there are a string of surprises.

Why is Harrison (the play’s fictionalization of Tim McVeigh, the Oklahoma city bomber) on death row? In 1995, he bombed a federal office building, killing many people, including children in the building’s day care center. Why did he set off the bomb? Because he was convinced that the federal government was shredding the Bill of Rights, and that for Liberty’s sake something had to be done to inspire a popular uprising. Robert Bergin, a graduate of the UW’s Professional Actor Training Program who has appeared before at ACT as the Middle Scrooge in A Christmas Carol, infuses Harrison with righteous justification and tit-for-tat comparisons. To Harrison, federal agents killed innocent people in Waco, Texas at the Branch Dividian compound in 1993 and before that in Ruby Ridge, Idaho in their confrontation with the Weaver family in 1992. And what happened to those who ordered the deaths or pulled the triggers or set off fires? Nothing, and the media appeared to simply go along with whatever the federal government wanted to say about it, even to suppress criticism of the federal actions and evidence that unnecessary violence was used against children and unarmed adults, all of whom had no court convictions at the time of these events.

Harrison quoted Jefferson’s words three times during the play: “The tree of liberty must be refreshed from time to time with the blood of patriots and tyrants.” Harrison pictures himself as the patriot extracting blood from tyrants.

Norman Newkirk as James (a fictionalization of Gore Vidal) brings great professional experience to his performance. And why is James there, away from Italy and Paris, at the U. S. Penitentiary in Terre Haute, Indiana? He, too, thinks the federal government is shredding the Bill of Rights. Though an ex-patriot, James clearly maintains a keen interest in the politics and government of his native country. Newkirk has both to maintain a connection to Harrison, and from time to time, he turns and addresses the audience, another connection. This turning to address the audience is equivalent to James (or Vidal) publishing an article. It works.

Rick Araluce’s (designer for Seattle Opera’s Wagner Ring Cycle) fiercely symmetrical set of a prison visitor meeting room suggests before a word of dialogue is spoken the inner logic of both Harrison and those with power in government: violence is met with violence—truth, creative response, and self-restraint are locked-up and kept forcibly out of reach.

With sounds of clanging doors and heavy foot steps, Sound Designer Kyle Thompson perfectly suggests that we are witness to a conversation in a maximum security prison.

The aggressive theft of Freedom by governments at all levels continues. White’s play demonstrates how theater can shine public attention on areas the media have abdicated their role as truthseekers. The vast snooping by the National Security Agency (NSA) is a theft of Freedom. The local abuse of the power of their uniform by police across the country in their interactions with our poor and non-white fellow citizens goes virtually unchecked. Another theft of Freedom. Harrison and James are making a plea to all the rest of us: look, listen, question, and, please, please, care.