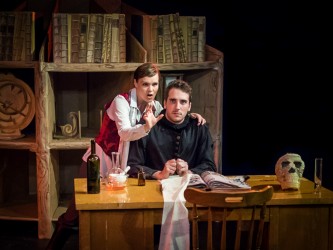 What would happen if Don Juan was confused with Faust, and Moliere was exhumed to write it? You would get Don Juan in Chicago by David Ives. Directed by Joshua Jon, and produced by Arouet, this farcical foray is a hodge-podge of physical comedy, literary references, and bawdy good times. It is filled with shenanigans, and written in rhyme.

Don Juan (Dylan Smith) puts the body in bawdy, as his face and physique flop and roll as he gasps, delights, and frets. His tall frame, and expressive maw don’t hide a thing, and Joshua Jon has Smith and the rest of the cast on point, as movement and charisma claim center stage. Faithful servant Leporello (Zach Sanders) has good chemistry with Smith, and the height difference alone establishes the hierarchy, and Sanders’ stocky frame completes his disgruntled position as immortal lackey. Mephistopheles (Caitlin Frances) is a seductress, and the smooth approach to the role offsets nicely with the chaos and intensity of the rest, as if the devil is the puppeteer coolly controlling those around her.

Silliness prevails on the rickety set (Kim Rosin), and lightning strikes under the flashy lights (Zach Brink) as rhyme and thunder follow the devil wherever she goes.  Leporello’s shoes show the hybrid of times from 1599 to now, and the costumes (Alison Owen) in general help the actors with their slapstick, and ground the world in the four-hundred year span in which it takes Don Juan to grow tired of womanizing.

Like any good farce, social commentary lacks, but not all theater has to teach; some can just delight. Grab a beer or a cocktail and go underground in Ballard. Arouet will make it worth your time.

Arouet presents Don Juan in Chicago by David Ives. Show runs at The Ballard Underground, 2220 NW Market St in Ballard.  Starting May 22nd the show runs from Thursday-Saturday until the 31st at 7:30pm. There is also a 2pm showing on Sunday May 18th, and a 7:30pm industry night on Tuesday the 20th. Tickets can be purchased in advance at brownpapertickets.com, or at the door at showtime.

“The Temperamentals” is personal, political, and timely
May 12, 2013
© 2021 Drama in the Hood. All rights reserved.
Site Design