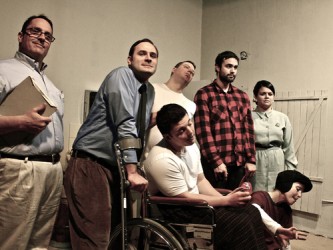 Seattle Subversive Theatre’s blackbox production of David E. Freeman’s Creeps is a painful and starkly political historical snapshot of the treatment of the disabled in the 1970’s and ’80’s. Five men with cerebral palsy (CP) live and work in a ‘sheltered workshop,’ a place where disabled individuals perform menial tasks for pittances. They seek refuge for a moment in the workshop’s unkempt restroom, and a conversation begins about how the workday is going, where the men’s lives are heading, and to what extent the world will ever be ready to truly welcome the disabled, or to treat them with anything like real understanding.

Freeman’s script exhibits quickfire dialogue that betrays its origins in the eighties. It echoes a highly effective formula for illuminating oppression and political movements on the stage: a handful of sympathetic, oppressed characters with contrasting—often diametrically opposed—methods of coping thrown into a high-pressure crucible. If you’ve ever seen a drama chronicling civil rights or the AIDS crisis, you know what I mean. Michael (M’Lissa Hayes), a non-verbal man, stays largely uninvolved with the conversation. Tom (Paul Ciasullo) is an optimistic artist with dreams of his voice being heard through paint. Pete (Matt Gaffney) is a jaded cynic whose primary interest is his own comfort. Sam (Spencer Graham) is furious and proud and often seeks retribution for his oppression. And Jim (Chad Jones) is an assimilationist committed to creating a better world for the disabled through diplomacy and ingratiation.

Freeman, the playwright, has CP himself and once lived in one of these workshops, so his script contains a breadth of emotional experience that is at once relateably banal and harrowingly shocking. This, I think, is the real success of Creeps: it reveals the extraordinary circumstances faced by the oppressed, while illuminating their fundamental normalcy. These men are as charming or off-putting, kind or cruel, happy or angry, as any other man. There is comraderie in this play, but there is also racism in this play, and there is misogyny. The characters are at each other’s throats over issues over who is more disabled, or is treated more favorably, and who deserves respect. Creeps neatly avoids tropes of wise and detached disabled people with ‘mind over matter’ mentalities—its characters are real, and reveal more truths than just those pertinent to the disabled.

It is difficult to discuss the acting in a play like Creeps where the actors each portray differing degrees of physical disability. Not being familiar with CP, I feel ill-equipped to evaluate that aspect except to say that I was convinced. To portray CP as well as they could, the actors consulted with individuals with CP, researched the biomechanics of it, and watched videos. Hopefully, these efforts mean that the portrayal I saw was as accurate and thoughtful as possible. On the other hand, I can speak to the character development as it was revealed and say that for the most part, these actors present highly compelling, immensely complicated human personalities with litheness and energy. Their interactions on stage indicate having known each other intimately for a long time. In the tiny set (it is a bathroom) they give the highly important impression of ownership, autonomy, and comfort. Not all of the actors are as polished as the rest, and there are times at which the rhythm of the scene is disrupted so that the audience remembers that we are in a theater, not a restroom. But the relationships that unfold on the stage are real and hot and provocative.

Physically, the space is brilliant, well-designed, and well-used. The bathroom set is designed with success to appear dirty and oppressive, and this is key to the narrative. In Creeps each character is in some small way distinct in their ability to work around the small bathroom—this creates much of the tension in the play. The play is smooth, subtle, and directed with admirable restraint and respect. It’s not perfectly crafted, but I’d argue that much of what Creeps seeks to convey is that “perfectly crafted” is rarely reasonable, or even desirable.

David E. Freeman’s Creeps was directed by Gregg Gilmore, and will run Fridays and Saturdays from May 9 to May 31 at Seattle Subversive Theatre (2220 NW Market Street, lower level). For tickets, visit brownpapertickets.com or call 425-259-4242