A New Brain is Full of Catchy Songs 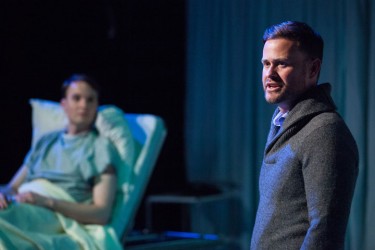 A New Brain—book and lyrics by William Finn, book by Finn and James Lapine and directed by Zandi Carlson—makes for uplifting musical theater about valuing every moment and making the most of second chances. Heart, time, and music are the main ingredients to “make a song” that recur in this energetic production from STAGEright Theatre in the tiny Black Box Theatre at Seattle Center.

William Finn set out to write a “musical documentary” in 1998, as he told Charlie Rose, based on his real-life brush with a brain abnormality called arteriovenous malformation (AVM). AVM can kill, as doctors told Finn after he collapsed 3 days after winning his first Tony award for Falsettos in 1992. But Finn, ever the artist, when he survived let the experience inspire songs for A New Brain. The play enjoyed several decent runs Off-Broadway with concerts produced by The Public Theater, and shows in New York, St. Louis, and at the Edinburgh Fringe Festival.

In the show, the fictitious Gordon Schwinn (competently performed by Daniel Stoltenberg) endures and survives AVM through surgery. In the nearly 105 minutes of the show 102 minutes are sung or sung & danced. Good thing the cast can sing and dance! And also act. Because of the acting, we empathize with the stressful, emotional journey with Gordon. Because of the acting, there is plenty to draw the eye during the ensemble production numbers besides the choreography (well handled for such a small space by Zandi Carlson and John R. Huddlestun). Because of the acting, the occasional ad libs are very much in character and funny.

Set Designer Brandon Estrella kept this simple—there is a raised stage which seats 2 keyboardists. Behind them sits the drummer in a corner of the fabric walls upon which hang a life preserver, a Casio piano, a couple of clocks, small knick-knacks and a few books. There’s a baby grand piano, and yet another keyboard in the opening scene.

An adjustable hospital bed and IV rack with white jackets or scrubs is enough to let us know when Gordon is in the hospital, which means most of the play. He’s surrounded by friends and staff who sing constantly: Mimi his mother (Susan Connors who has regional theater, TV and radio credits); Roger his boyfriend (Justin Wright Carrell, a real-life former Navy nuclear submarine officer). Roger’s solo song, “I’d Rather be Sailing,” is one of the serendipities of the production that Carrell sings a song that literally is true to his passions. Meg McLynn showed a great deal of zest in her role as Rhoda, Gordon’s close friend who sticks by him through the whole ordeal.

Mr. Bungee (Matt Giles) represents the commercial interests which many artists must serve to earn income to pay bills. Gordon worries that he is destroying his personal artistic creativity by writing silly rhyming couplets for Mr. Bungee. Giles is a pro, and watching him sing and dance is one of the charms of this production.

The show could be improved. Stolenberg’s voice lacked confidence a couple of times. This could have been opening night jitters. Sometimes lines were not spoken loud enough to carry throughout the theater. Many times the background music was too loud and drowned out the lyrics. Which is a shame because they were very good.

There are 32 songs in this show. Show stoppers included: “I’d Rather be Sailing,” “Heart and Music,” “And they’re Off,” “Poor, Unsuccessful, and Fat,” “Yes,” and “Don’t Give In.” The tunes are hummable, a good sign.

STAGEright produces plays that directors feel a passion to put on. This passion is viscerally felt throughout the whole evening. It takes passion to organize and direct a cast of 10, 3 musicians, and the creative team for a tiny theater that seats about 100 people for a show with just 9 performances. But, because the whole set and props can fit in a U-Haul truck, maybe this show will have “wheels” and get to travel?