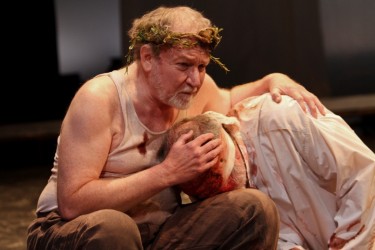 A weird conglomerate of directorial choices makes this production of Shakespeare’s devastating masterpiece immensely compelling, but at times baffling, and a little distracting.

Whenever a production company does King Lear, the audience knows it’s going to be good. Lear is not only a masterpiece of narrative, psychology, and character, but it’s a masterpiece with something for anyone to connect with, across the spectra of age and gender. It’s a story about the masks we wear to get what we want, the pretenses we engage in to defy cultural barriers, the tension between love and power, the fine lines between sanity and insanity, death and life, age and youth. These themes are woven in with a litheness of language that exceeds even Shakespeare’s other works. In short, Lear will rarely flop. So, it being the case that this is one of the absolute paradigms of theatrical tragedies written in the English language, I’m going to start with the founding idea that this production, like any production of King Lear, is worth watching.

That being said, Sheila Daniels’ direction did not seem, overall, to help convey this monarch of narratives. There seems to be a trend of telling Shakespeare tragedies in gray-scale, timeless, placeless, anonymity, with minimal sets and aggressive musical accompaniment. Daniels appears aware of this and inclined to further it. But the key of timeless relatability must be to eliminate markers of historical period, not to jumble them together. Why are there rapiers, swords, rifles, and handguns in the same story? Why are the men wearing leather tunics and Renaissance-wear, while the women wear sexy dresses and Chelsea-heeled ankle boots? The primary set-piece is a barren frame of metal scaffolding that seems to serve little purpose other than to indicate “indoors.” Other set pieces include some wooden buckets, a wheeled dolly, a stool. These choices do not leave the audience thinking, “this could be happening any time, any place!” They leave us thinking, “Where and when the heck are we?!” This is distracting.

Yet the actual minimal nature of the set is great for the story. A backdrop of wide, white hanging panels lend a grandness to the set without being distracting, and without positively identifying place or time.

Watching this production, it is obvious that each of these actors is terrifically talented. Dan Kremer’s Lear bears all of the softness, sadness, aggression, and instability that the complicated King merits. Goneril (Linda K. Morris) and Regan (Debra Pralle) are an excellent duo of precarious cruelty. Eric Riedmann brought a delicateness to Edmund that I’ve never seen before, and Jorge Chacon’s Edgar was as sweet and wonderful as could be. Michael Winters’ Gloucester was a parable of noble fortitude. Todd Jefferson Moore’s Fool was weird and distracting—not least because he kept swallowing his all-important, narrative-revealing lines. Cordelia (Elinor Gunn) seemed as if she was performing in a quite-good college-level acting class show. Amy Thone, crisp and compelling as she is, appeared unnaturally self-assured throughout, unaffected by the internal battle that is the essence of the Duchess of Kent’s journey.

Yet, despite being broadly gifted, this cast does not act together to portray real relationships. There is a distance between the characters consistent throughout, such that when Kent (spoiler alert) takes her own life in the face of Lear’s death, the moment feels abrupt and almost funny. The enormity of the contempt, hatred, resentment, and love between characters is what pushes this story to it’s tragic conclusions, and though they shine through in wondrous moments, they are not consistent. Why, too, does every character speak with a different dialect? Are we in New England, South Dakota, Southern California? These are questions that should not require asking.

William Shakespeare’s King Lear was directed by Sheila Daniels, and will run from April 24 to May 17 at the Cornish Playhouse at Seattle Center (201 Mercer St, Seattle, WA 98109). For tickets, visit SeattleShakespeare.org