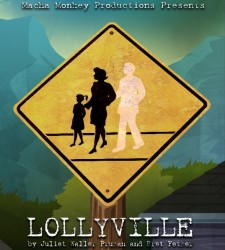 Lollyville, set in “an isolated town in a little-known valley within impenetrable mountains” is the delightfully weird, new play by Bret Fetzer and Juliet Waller Pruzan. Brought to you by Macha Monkey and directed by Kristina Sutherland Rowell, Lollyville estranges its audience from the start. This haunting and stylized dramedy follows the ghost of a travelling salesman who is the lone male figure in a village inhabited entirely by women; the gender opposite of a Samuel Beckett play, Lollyville rings like an existentialist struggle as it questions human existence, presses issues of loneliness, and begs for the universe to make sense by following the long theatrical tradition of absurdity.

Though the story is simple, the plot is not the focus in this symbolic, two-hour metaphor. While evoking the question how would women survive without men, and answering it with they wouldn’t, the play is not as feminist as the premise suggests. More so the women who inhabit the remote Lollyville stand in for all of humanity as the bizarre script follows themes of captivity, abandonment, loneliness, and isolation. These basic, human pitfalls take center stage at the Richard Hugo House, and Kristina Sutherland Rowell keeps all cylinders firing in a play that could have easily fallen off the deep end into a giant pit of slithering nonsense.

Grounded by the eerie cello of Matthew Tevenan, and masterful sound design of Joseph Swartz, the actors shine as they manage to bring the flesh of humanity to this heady piece of philosophy. Colin Featherston-Wilkinson as Esther, and Narea Kang as Gillian manage the sort of chemistry expected of Tweedledee and Tweedledum; Sarah Winsor as Juniper is whimsical in her playful turn, and convincing in her meddlesome role; Jillian Vashro as depressed Alice, and Monica Finney as desperate Jessica keep up their corner with emotional truth in their portrayal of grasping at fleeting love; Rebecca Goldberg brings her own brand of comedy in her earnest performance as the unstable psychiatrist; Tracy Leigh perfects the creepy Ruth in a disturbing turn as the town predator; and Matthew Middleton orchestrates the four corners of the madness with graceful movement, and is surprisingly solid in his embodiment of ether.

Complete with existential ladybugs, Lollyville is not a play for theater goers who like a story that is easy to follow, but will be sure to be a joy to the poetically minded patrons of the Hugo House. With pressing questions like “are you a lonely worm?”, and strange “cravings for money” this play is for the open minded inquisitors of human existence.  It is a mystery that presses the question: what’s going on? The dizzy delight that is produced will make your inner philosopher smile, and the metaphor will stick with you through the night.

Lollyville runs from May 2nd to May 24th at 8pm on Fridays and Saturdays, with a special pay-what-you-can on Monday May 12th at The Richard Hugo House. 1634 11th Avenue, Capitol Hill. Tickets can be purchased at the door, or online at click4tix.com.