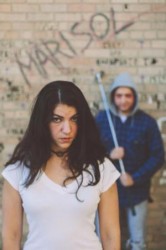 For their first production, the new theatre Collision Project chose José Rivera’s Marisol, an Obie award winner in 1993.  A post-apocalyptic play, the director wisely chose to stage it in the Satori Lab at Inscape, commonly known as the old Immigration jail on the edge of Chinatown.  It is no accident that New Century also chose this venue for its production of Kafka’s The Trial.  Just walking in the main door is positively eerie.

Taking place in New York City, the main character in Marisol is a bilingual “Puerto Rican yuppie”, named Marisol, who works in publishing in Manhattan but still lives in the Bronx.  Mixing elements of Surrealism and South American Magical Realism, the author takes Marisol through a series of mishaps, in which she is possibly killed, saved then abandoned by a guardian angel,  becomes homeless, and is ultimately redeemed by re-connecting with her best friend and forming a family group to try to survive.

The technical aspects of the show were superb.  The set by Antoinette Bianco, complete with imposing big city style graffiti by Shane Cruz, lights by Sara Torres and sound design by Kyle Thompson, all  created a setting that got the message across very clearly that the characters inhabited a hostile, dangerous environment which was successfully obliterating humanistic values.

As a result, the exposition of the play seemed overly long and extremely wordy, with constant repetitive descriptions of the breakdown of all social cohesion.  Since the setting was the protagonist, the characters seemed to stumble in a loosely constructed plot.  Much of the dialogue and monologues telegraphed the audience about what was already abundantly obvious.

Sermona Mitchell as the guardian Angel, and Ben D. McFadden as Lenny delivered the best performances, as they were the only actors who seemed to connect with the emotions of their characters.  Sermona Mitchell, a handsome rather than pretty African American had a lovely deep velvety voice, capable of conveying the other-worldliness of the sub-conscious.  McFadden, playing a psychopath, seemed to be the only believable human on stage.  Sadly, both these actors had very little stage time.  It was quite disappointing that three of the other actors had very noticeable lisps.

Although this play did win an Obie as a Stage-play, it had a very basic flaw, in that it had a lot of short scenes, so the script was more suitable for a film.  N.B. the author is also an Oscar winning screenwriter.  The scene changes were not executed swiftly enough to keep things moving.  With little character development, absolutely no comic relief and two hours of intensity, it was very difficult to sit through.

It seems that this play may appeal to the people who like the French movie Delicatessen, a very violent incoherent post-apocalyptic film.