Larry Hohm delivers stories to both warm and chill your heart

Larry Hohm seems a friend telling stories over a firepit, with an ominous tone and a tenderness that make the suspense all the more palpable. In the cozy stage of 18th and Union, Hohm recited a series of chilling short stories, from acclaimed authors Shirley Jackson, Frederick Brown, Dick Skeen, Ursula K. Le Guin, Anna Starobinets, and Jeffrey Whitmore. He uses no visual props, except for a fake gun (of which the audience is informed at the beginning of the performance) and uses minimal audio as intermissions between different scenes or stories. This is probably due to the medium of storytelling itself, which doesn’t require much other than a narrator and an audience with an open imagination. There is always a consideration of lighting of background elements that could help set the scene but this, of course, depends on the performer’s creative intention. 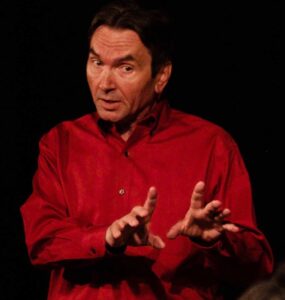 Hohm’s intonation, cadence, body language and facial expressions are, then, solely responsible for creating the right environment for a storytelling night, which he does remarkably well. His voice is deep and soothing and highly expressive even through silences. Pauses, gasps and changes in speed serve to build up tension and keep the narration dynamic and expressive. Additionally, Hohm’s demeanor is friendly and present as he interacts with his audience, and he presents himself as a medium through which truly felt stories come alive. He’s just the kind of person you’d like to hear a story from.

Not unlike a written book, and because of the minimal visual and audio aids, Hohm’s performance requires focus, attention to detail, and imagination to picture the settings in your mind. Thankfully, the prose contains extensive sensory and descriptive details that make the stories easily palpable. Characters feel more intimate as their thoughts and actions are explored extensively. The performance also requires an audience who enjoys the suspense and subtle nuances of a slow-moving story that will have them holding their breaths as they wait for more. It is, truthfully, a less dynamic medium than traditional plays and musical performances, but its charm arises in its tenderness, intimacy and delicately built narration. The stories are set up with sweet moments with loved ones, which makes the darker endings even more unsettling.

Although this was a one-time performance, Larry Hohm often holds similar readings throughout the year. If they are anything like this one, they should be perfect for a quiet night out, during which you can slow down, rest your head and immerse yourself into a new story.