I must confess-although I do not have a Father confessor at the moment-that I was not exactly enthusiastic about being the only reviewer available to review Reboot’s production of Jesus Christ Superstar at Theatre off Jackson last night….but like a Biblical revelation it ended up being the most interesting musical production I have ever seen, in spite of all the Broadway and West End productions I have seen. And frankly because of the intimacy of the space, the most enjoyable.

Jesus Christ Superstar as the name implies is a modern rendering of the Passion of Christ; that is to say, the last week of Jesus’s life when he returns to Jerusalem, is hailed a king, celebrates Passover with his disciples, aka the Last Supper, is betrayed by Judas and the mob who previously adored him, stands trial, is crucified and dies.

Andrew Lloyd Webber’s Jesus Christ Superstar, with lyrics by Tim Rice, was initially released as an album because nobody would back it on Broadway. When it did run on Broadway it was one of the longest running “musicals” in history. However because of its tragic nature it was termed a “Rock Opera,” in fact it presents a whole range of human emotions.

Reboot’s director and choreographer Harry Turpin created a masterpiece due to his ingenious creativity. Turpin’s concept, using modern technology to emphasize the spin elements of superstar status and betrayal was a shrewd interpretation not only of the text but of our current political situation on the eve of a crucial national election. 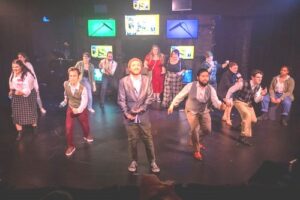 Also contributing to the masterpiece was Turpin’s enchanting choreography. Part of the success of the choreography and the show as a whole was that he cast actors and dancers who looked like real people, not like models or dancers, and did they ever have energy and an ability to connect with the audience!!!!!

Every dance number was delightful, but standouts were King Herod’s song, with Natalie Moe as Herod, accompanied by the elf-like Aaron Jin and Mariesa Genzale. Another great number was Jesus Christ Superstar led by Shana E. Emile.

As Mary (Magdalene) Jordyn Day Palmer sang her solo song “I Don’t Know How to Love Him” with great feeling and authenticity. Her contribution to “Everything’s All Right” was soothing and peaceful. 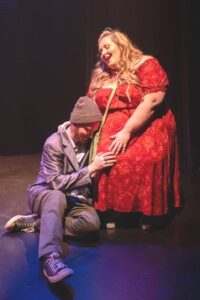 A lot of credit goes to the tech crew Turpin assembled: Video Engineers Andrew Croll and Grant Boling, Sound engineer Sandra Huezo-Menjivar and of course the multi-talented musical director, conductor and keyboardist Sam Peters, who led musicians William Bryant on the keyboard, clarinet and oboe, Kendall Crane on the Bass and Cam Schneider on Guitar and Scot Sexton on the Drums. Unlike many musicals, the music complimented the story and the singers and never drowned them out, as is so often the case. It may have not been a full orchestra, but it was stunning.

Brilliant costumer Janelle Rimbough managed to completely conceal all the double and triple casting with very poignant costume choices. Immediately some of the characters walked on stage, just by their costumes and hair styles, for example Noel Pederson as Annas in her black business suit and high heels, the audience knew exactly what sort of a person they were. 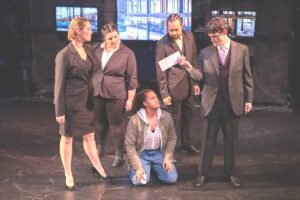 Also credit goes to Theatre off Jackson’s space, which director Turpin exploited to perfection, using the aisles as entrances which served to involve the audience in the drama.

Reboot, Director Turpin, the entire cast and crew have produced a superb production which everybody in Seattle should go see. Before the show, one of my friends said she was contemplating getting tickets but wanted my opinion first. I texted her at intermission, telling her to get the tickets right away as it was liable to be sold out.

I advise everybody to do the same.

The International District has umpteen great restaurants close by Theatre off Jackson (my favorite is Moonlight Café at 20th and Jackson, which has a parking lot and both a vegetarian and carnivore menu)

N.B. Patrons of the theatre must wear masks.

Parking and Transportation:
Link Light Rail: International District/Chinatown Station
First Hill Streetcar: 7th & Jackson Chinatown
Parking is available on-street or in the Interim lot at 8th and Jackson, located just under the I-5 overpass to the east. Fee is usually less than $5.00. Paid street parking is also available in the surrounding neighborhood but can be difficult to find.

The theatre with a bar opens one hour before the show.