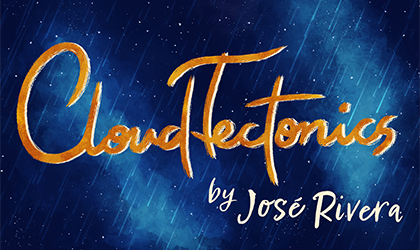 “Time and I don’t hang out”

Now running at 12th Ave Arts, Sound Theatre Company’s production of Cloud Tectonics, an incredibly intriguing play by José Rivera, is truly magnificent. Without much of a plot, or a clear resolution to the conflicts and cosmological questions it raises, it draws on the Latin American tradition of Magical Realism, to not only enlighten us but also to entertain us.

Celestina, a mysterious but gorgeous, slightly pregnant Latina hitch hiking during a hurricane, is picked up by Anibal, a good Samaritan of Puerto Rican descent, who takes her back to his place, only to discover that there is something very odd about her, and the effect that she has on time.

Celestina claims that she does not understand the concept of time, nor its vocabulary and the recounting of her past does not make sense using the logic of the world as we imperfectly understand it. Enter Anibal’s brother to complicate things as both brothers fall in love with Celestina. Then a loose plot is introduced, involving time lapses.

In fact, Celestina inhabits a different temporal dimension from Anibal; his is the one we human beings on earth recognize. The two individuals and temporal dimensions intersect during two apocalyptic external events of utmost important to the future of the planet.

Using superb witty, poetic dialogue the three characters try to make sense of the time lapses revealing the scientific and perceptual peculiarities of time itself. The performances by the two leads, Jay Woods as Celestina and Myles Romo as Anibal, were absolutely stellar vocally; they handled the intricate dialogue superbly, with expert comic timing.

As an added benefit, the two used physicality and facial expressions to exquisitely communicate non-verbally, which was highly entertaining. Jacob Alcazar, as the abrasive brother, put in a solid performance as an angry army vet, whose personality is the polar opposite of Anibar’s.

Set design by Parmida Ziaei served the production well and suggested the ethereal nature of Celestina and of the experience of being not in sync with time, as did the sound design by Erin Rose Bednarz. This very challenging play was directed by Jéhan Òsanyìn.

I heartily recommend Cloud Tectonics, it has a surprising ending, and this production really brought out the depth of the play, while entertaining the audience, as it pondered some of the great questions of the universe.