On July 15th Agatha Christie’s mystery, Black Coffee, officially opened up on the Jewell Mainstage at Taproot Theatre Company. Taproot Theatre Company is a non-profit professional theatre in Greenwood supported by Artsfund and 4Culture (just a couple of the generous sponsors). Under the direction of Marianne Savell, this preposterously funny murder mystery came to life.

The set was stationary, but quite elaborate for the midsize theatre. A well stocked bookcase that opened up to a sort of terrace was the backdrop. All the action occurred around a desk and a couple of settees. While sets are usually ever-moving in shows, this set allowed for the audience to really focus on the acting and plot. It also kept an already long show from being too long.

The plot is your typical Agatha Christie murder mystery. Someone in a group setting gets murdered and everyone has a motive, albeit some are more far fetched than others. In Black Coffee—set in 1930s England as costumes, makeup, and dialogue suggests—the victim was unlikable and obscenely wealthy; quite the deadly combination. Though murder is never funny it was in this piece with outlandish characters with even more outlandish schemes. Possibly the most comedic and relevant part of the play was the concept of a foreigner and how some people can’t drop their pre-conceived notions.

Without giving too much away, Act 1 consisted of character and story development. Who’s who? Who has what to gain by the death of a rich person? Who is the rat that needs trapped? It wouldn’t have been a Christie story without detective Hercule Poirot—played by Richard Sloniker—to the rescue. Sloniker excellently played the Belgian detective from the quick-wittedness to the exaggerated accent, thanks to accent dialect coach Katya Davida. While all the actors were great a few that particularly stood out were Kim Morris playing Miss Caroline Armory and Nathan Brockett playing Captain Arthur Hastings, O.B.E. These three garnered much of the audience’s reactions. A slight point of criticism is that a couple of the actors in the show either had no accent or kept slipping in and out of accent. Which isn’t a huge deal, it’s just a tad distracting when one has an ear for accents. 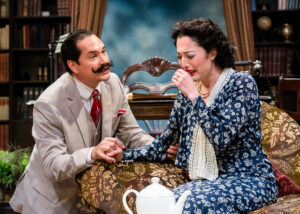 Act II came about after an intermission an hour and a half through the show. Though that is the average time for an intermission, the play felt about 2/3 done at this and could have stood to break up the show a little sooner. Anyway, Act II of Black Coffee was about laying out the cheese and catching the rat, as Mr. Poirot would say.

Black Coffee, by Agatha Christie. Jewell Mainstage at Taproot Theatre. Running through August 19, 2022.
Per the press release: “Tickets will be available online at taproottheatre.org, by phone 206.781.9707 (Tue-Sat, noon-5:00 PM) or in person at 204 N 85th St. Ticket prices range from $25-52 with discounts available for students, seniors, active military, 25 & Under and TeenTix members. Discounts are also available for groups of 8 or more by calling 206.781.9708 or by visiting taproottheatre.org/group-sales”