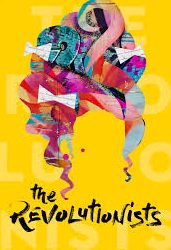 Award winning director Kelly Kitchens has gathered four highly skilled actresses to take on the script’s demanding parts. Sunam Ellis plays the feminist playwright Olympe De Gouges who must learn that to live her truth, she cannot simply watch a revolution from the sidelines. Dedra D. Woods portrays the passionate Marianne Anglle, a composite character representing freed Carribean slaves fighting in France for justice for their home country. The role of the fiery young assassin Charolette Corday is taken on by Hannah Mootz. Her steely focus on her task of murdering Jean Paul Marat serves as a font of inspiration for the other Revolutionists. Jonelle Jordan somehow channels a good dose of “All in the Family’s” Edith Bunker in her hilarious yet heartfelt portrayal of Marie-Antoinette, a disgraced and dethroned queen who claims here that she is simply the victim of a lot of bad press.

These visionary women insist that a good deed needs a good story and rely on de Gouges to get it right in her story telling. They explain that rather than write what she knows, de Gouges should write what she wants! The show’s emphasis on the creative process of producing a playable script provides a nuanced touch of the absurd to the production. During the course of the evening the four heroes realize that it must be the women who will do the heavy lifting in a societal revolution if there are to be lasting changes for good in the world.

Gunderson covers a lot of ground here touching upon the decay of the original French revolutionary vision, the mistreatment of Caribbean natives, the suffocating patriarchal nature of the times and the horror of facing the death-dealing guillotine. Meaty themes to be sure, and occasionally the play can be awfully wordy, but Kitchens focuses on moving scenes along at a crisp rate and the four cast members have enough theatrical chops to ensure that every scene will land a number of solid punches. The work swiftly shuttles back and forth between hilarious word play and painful moments of loss. Throughout these drastic changes a spirited camaraderie shared by the four heroines triumphantly emerges.

The Artswest crew does a stellar job handling Gunderson’s unique work. It took me a while to realize that scenic designer Julia Welch’s stark wooden stage easily serves as the scaffold for the inevitable executions that threaten these four women. The most terrifying moment of the evening occurs when one of the heroes learns that there is no simple stage exit when the certainty of a guillotine’s death is waiting. Costume designer Chelsea Cook has the characters look as if they stepped right out of a World History textbook. The cast and crew have offered a very good excuse to come out of the rainy skies to enjoy a thought-provoking night of solid theater in West Seattle.

The Revolutionists runs at the Artwest Playhouse at 4711 California Ave through February 9. Tickets are available online at www.artswest.org, by phone at 206-938-0339 or at the box office Thursday through Saturday, 2-7:30 p.m.