Roll the dice with Guys and Dolls at Village Theatre

One of the reasons audiences flock to the theater is to avoid the harsh realities of the human experience. With things in the world being what they are, escaping into “Runyonland” where all is bright and fun and even the bad guys aren’t really that bad seems like the most logical course of action. Director Billie Wildrick and the team at Village Theatre have created the perfect haven for those looking to lose themselves in the wonderful world of Guys and Dolls.

Based on a collection of shorts stories by Damon Runyon, Guys and Dolls tells of three intertwining love stories – a gangster and a missionary girl, a Hot Box dancer and her fiancé, and a man and his crap game. Nathan Detroit runs an illicit, floating crap game but he must come up with $1,000 to secure a location away from the prying eyes of Lt. Brannigan and the NYPD. This leads him to Sky Masterson, a notorious gangster/gambler, known for making outrageous wagers. To make his money, Nathan makes what he thinks is an unlosable, $1,000 bet: Sky must take the woman of his choosing to Havana. Nathan chooses the head of the local Save a Soul Mission, Sarah Brown, the woman he thinks is the least likely to agree to a wild night in Cuba with a criminal. Unfortunately (or fortunately for us) this is not Nathan Detroit’s only problem. His extremely long suffering fiancé Miss Adelaide is at the end of her patience and is demanding they finally get married after a 14-year engagement. After some impressive dance numbers, an underground crap game, a dice roll with soul-high stakes, and a slew of songs both familiar and delightful, the guys end up married to their respective dolls and all is right in Runyonland. 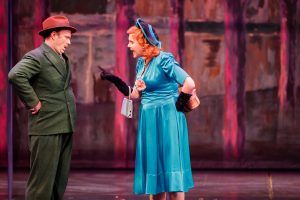 With characters as well-known and well-trod as those in Guys and Dolls, it would be easy and almost expected that they would fall into caricature. With this capable crew however, there is humanity and heart all over the stage. Matt Wolfe as “good old reliable” Nathan Detroit brings a high-strung, skittish energy to the character and though he really doesn’t do anything particularly redeemable throughout the show, one can’t help but be drawn in and charmed by Wolfe’s portrayal. Opposite Wolfe is Kate Jaeger as the sniffly showgirl Miss Adelaide. Jaeger is completely captivating and steals most moments in which she inhabits the stage – not an easy thing to do in a cast replete with larger-than-life performances. In “Adelaide’s Lament” Jaeger manages to find new and hilarious moments in a song already well mined by many a belting character actress. 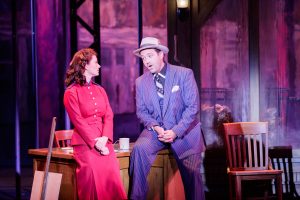 Dane Stokinger and Mallory King as Sky Masterson and Sarah Brown respectively, have an effortless and instant chemistry. Their relationship is the grounded and authentic eye of this incredibly stylized and chaotic tornado. Stokinger has a rich baritone sound with an effortless and powerful top. King is winning and beautifully vulnerable without ever appearing weak. She has a remarkable soprano range but really shines in the smooth transition into her lower range. 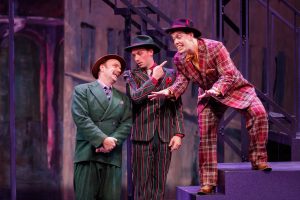 Other standouts are Nicely-Nicely Johnson played by Kyle Nicholas Anderson, Benny Southstreet played by John David Scott, and Rusty Charlie played by MJ Jurgensen. I would watch an entire show of just these three characters played to comical perfection by these three actors. As the play is nearing its end, you can feel the entire audience breathlessly anticipating the rousing “Sit Down, You’re Rockin’ the Boat” and Anderson, backed by the amazing ensemble, does not disappoint. 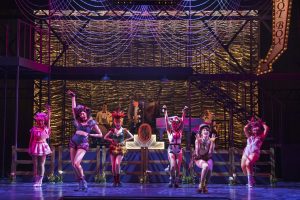 Wildrick and choreographer Nikki Long have taken full advantage of this incredibly talented ensemble. Each beat of music is utilized and every dance move has purpose and motivation. The orchestra, led by music director Julia Thornton, walks the very fine line between being sharp and polished and finding the swinging groove that the genre dictates. Costume designer Cathy Hunt created wonderful, bright, almost cartoony costumes. Each one is distinct and manages to be a perfect extension of the character inside it.

Guys and Dolls will be in Issaquah at the Francis J Gaudette Theatre through December 9, 2019 and at the Everett Performing Arts Center January 3 – February 2, 2020. For tickets and more information, please visit www.villagetheatre.org.