“Like Rosetta, I want to leave an audience with joy and perhaps a deeper realization that there’s power in love,”

There is no doubt that playwright Cheryl L. West’s intention was completely successful, everybody in the audience of Seattle Rep’s production of Shout Sister Shout on opening night left with an incredible feeling of joy and love. Everything about this musical was magnificent beginning with the fabulous script chocked full of witty yet profound dialogue, superb acting, singing and dancing, beautiful costumes and a flawless production, directed by Randy Johnson.

The Sister in the title refers to an extremely important singer/guitarist, Sister Rosetta Tharp, who some people do not remember, but really should, since she is considered, by many aficionados, as the Godmother of Rock n’Roll. Although her popularity peaked in the 1930’s and ‘40’s, it was not until 2017 that she was inducted into the Rock n’Roll Hall of Fame. Her 1944 recording of Down by the Riverside was selected for inclusion into the National Recording Registry of the U.S. Library of Congress in 2004.

A musical prodigy from age 4, when she learned to play the guitar and piano, she grew up in Arkansas in a conservative religious community and attended the Church of God in Christ, a Pentecostal sect. As a child and teen, she performed traditional African-American religious music with her mother, but later ran afoul of the religious community when she had the audacity to mix Gospel and secular music and dared to perform in nightclubs!!!!

Shout Sister Shout begins when Rosetta is a shy, self-effacing, 18-year old, who when she isn’t singing, is tongue-tied, inarticulate and just wants to be invisible. She is willingly controlled by her mother and then her abusive exploitive husband. As the play enfolds, she becomes assertive, confident and takes control of her life, while battling loneliness, failed marriages and the vicissitudes of show business.

Along the way, the author weaves in commentary about the evolution of African American musical styles from Spirituals, Gospel, Jazz , Bee-Bop to Rock ‘n Roll and beyond. Also mentioned was the intense controversy within the African American musical community between the religious faction and the secular singers. Sister Rosetta felt, as many others did, that a Christian singer could mix Gospel and Blues but not be condemned to hell. 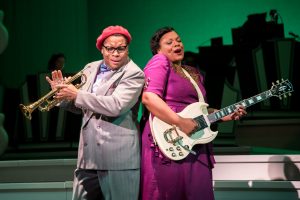 Both vocally and visually the show was exquisite. Words cannot describe the talent of the star, Carrie Compere as Sister Rosetta Tharpe. Her ability to spread joy and love to the whole audience was apparent from her first song, but my favorite was Precious Lord. Her acting ability and comic timing were outstanding, at times she was a sassy woman, who put a mansplaining reporter in his place, at times, she was a vulnerable woman lacking love, at other times so desperate to hang on to her husband’s love, that she adopted excessive people pleasing behavior. Ms. Compere’s ability to connect with the audience was a delight from the beginning to the end

Other standouts in this superb ensemble cast were Carols Dennis who played Rosetta’s mother and Mahalia Jackson, Christin Byrdsong as Little Richard and Allison Semmes as Marie Knight, who toured with both Mahalia Jackson and Rosetta. 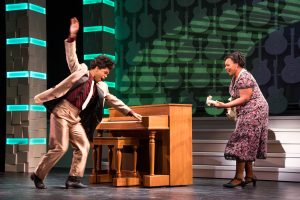 A huge amount of credit goes to Sheilah V. Walker the Music Director and arranger as well as the set designer G.W. Skip Mercier, whose simple set was appropriate to all the scenes. Robert Wierzel is to be commended for his gorgeous lighting which differentiated all the different scenes without changing the set.

Costumes by Emilio Sosa were nothing short of stupendous; everything from frumpy 1930’s modest Christian dresses to flamboyant scandalous costumes for the dancers in Harlem’s famed Cotton Club. (or in the context of this play-the INFAMOUS Cotton Club) The evening dresses for Marie Knight were simply to die for.

Perhaps the best part of Shout Sister Shout was the experience of being in a live audience with audience participation. Immediately the curtain went up, everyone was drawn in by the humor, the very real human story and of course the music and the love. If this is the only show you see this year, or even in your lifetime, it is worth it.
Shout Sister Shout. Seattle Repertory Theatre, Seattle Center, 155 Mercer St. Seattle, WA 98109 Tues-Sun 7:30pm. Sat & Sun Matinée 2 pm. PWYC Nov. 17, 19, 24, Dec. 1 all at 7:30 pm, Dec. 8 2pm. Closes Dec. 22. Tickets: https://www.seattlerep.org/plays/1920/shout-sister-shout/performances. Talk backs- Info: www.Seattlerep.org

No street parking, Plenty of Public Transportation. Parking Garage across the street.