Seattle’s own Theater Simple is honored and thrilled to reveal that the US Embassy in Turkmenistan has chosen their production of CARAVAN CHRONICLES aka Trailer Tales– the intimate interactive family reunion disguised as an art event – to perform at a festival in the capital city of Ashgabat in mid-November. The public is invited to a pay what you can open rehearsal and a preview of the show, both at 18th and Union.

The company will be featured as part of the festival of “Theatrical Art of the Epoch of Happiness”, organized by the Ministry of Culture of Turkmenistan. The simpletons will be conducting acting and theater-making workshops as well, participating in an exchange between Turkmenistan and American theater culture.

DREAM TEAM Traveling along with theater simple founders Llysa Holland and Andrew Litzky are veteran simpletons K. Brian Neel (52 Pick Up, The Snow Queen, Trailer Tales), Shermona Mitchell (Camino Real) and currently-London-based lighting wizard Jason Meininger (The Master & Margarita, Caucasian Chalk Circle, 52 Pick Up). On the tactical side, Veronica Mushkeli, doctoral candidate at UW in Slavic Studies, who helped theater simple with translation and dramaturgy on THE MASTER & MARGARITA will be translating the show into the Russian subtitles.

The public is invited to a pay what you can open rehearsal and a preview of the show, both at 18th and Union. 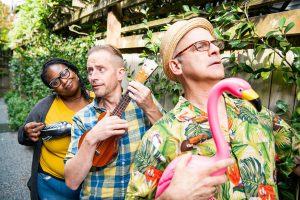 *To defray the cost of the tour, donations are gratefully accepted. https://theatersimple.org/trailer-tales-weekend-safari-caravan-chronicles-urban-reunion