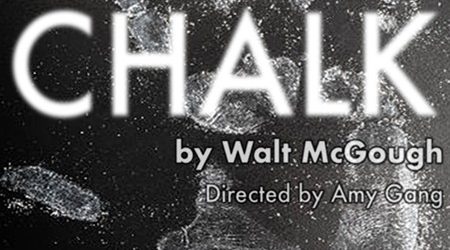 Poster designed by K. Brian Neal. Taken from The Stranger

The apocalypse has arrived; where are you?  If you’re Maggie, then in a circle made of your daughter’s old gymnastic chalk with some pop tarts.  Chalk, written by Walt McGough and produced and directed by Amy Gang, opened October 24th at 18th & Union and is a two women show that sees Maggie (Marry Brown) hiding out while carnage rages outside in the world. Meanwhile, her daughter Cora (Jasmine Lomax) returns from scavenging for food.  However, something is amiss when Cora returns, leading to a very frank discussion.

The extremely strong script by McGough breathes life into this almost straight-shot of an hour.  It doesn’t waste time with explaining why or how the apocalypse happened, the audience is left fit the pieces together as the conversations between Maggie and Cora transpire. At times, it can be confusing the exact parameters of the apocalypse, but to say more would mean to spoil some of the twists and turns around the chalk circle.  Instead, that time is given to exploring the relationship between our mother and daughter.

The back and forth between Maggie and Cora will have you go from chuckling at the backhanded and sarcastic remarks of the mother-daughter relationship to dead silence as each admit something to other they wish they hadn’t. Mary Brown gives depth to a character that, on surface, could be all snark but is actually hiding painful memories. She gives looks and silences that can speak louder than any of her quips.  Jasmine Lomax’s child in distress came off as whiney at first, but as the dynamic developed, her frustration and distress makes her character far more empathetic. The chemistry between the two leads is for all to see as the play ramps up to its final conclusion.

The stage, at times, contributes hugely to the tension of the conversation.  The claustrophobic nature of the chalk circle with Cora prowling around it makes for enticing viewing in some instances. However, this also held the actresses back due to the sparse nature of the set that left Cora to just walk around the chalk circle almost looking for something to do or focus on.  Certain lighting choices that were made also felt almost unnecessary, drawing your attention away from the characters. The fight choreography was also hard to follow as well.  Although, some of this was due to the lighting as it took place in a darkened section of the stage.

Chalk leaves the audience with very little time to be bored with its short runtime and its well earned conclusion leaves a great feeling of satisfaction walking out onto 18th street.  The two leads do justice to a great script and adapt reasonably well in the small and closed off setting. This small and rather straightforward play might just surprise you on the way out.

Read other reviews by Nicholas Loduca