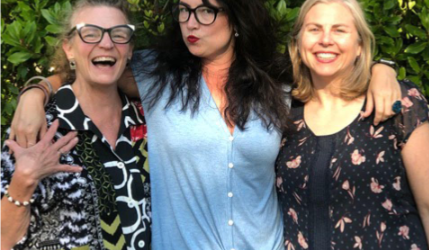 Each short play runs for ten to fifteen minutes, which sort of leaves you wanting more. Regardless of their short duration, they do not fail to relay their intended meanings and themes. Each of them gives you new perspectives.

The first play, Rebel Nuns, written by Anuhea Brown, is a satire on how religious beliefs conflict with basic human rights and needs. It ends with such an exciting scene that you’d wish for more of it.
Elixir of Youth by Lenore Bensinger raises a concern that probably all of us have: aging. Who would not want to be young forever, right?
While the first two plays are relatively playful and humorous, Untold, written by Elizabeth Coplan is the opposite, representing the grief coming from the loss of the mother.
The next play, Crooked Face by Robin Brooks, is also about a loss, however, it is about a mom who is not really a mother.
Local actress, Keiko Green’s Stand shifts the play to another topic: careers. The play focuses on women needing to stand strong in apatriarchal society. It might sound cliche, however, the way the writer delivers it, will for sure keep you focused.
Then comes Emily Conbere’s How to Get There, a play centered on family life, and the role of women as mothers and wives.  It also has a nice blend of humor and sorrow.
The last play Biter, written by Kelleen Conway Blanchard, also depicts  motherhood. However, it shifts the focus to sacrifices and given up dreams of a mother.

Although these topics might seem pretty familiar or common, these plays stir so much emotion,  they successfully tackle the struggles and fights that women must go through. The production is wonderfully complex.
A number of  Seattle’s favorite actors make up the cast: Megan Ahiers, Joanne Burger, Monica Domena, Shane Regan, Sarah Schweid, and Kendall Uyeji are all featured.   The stage set up was simple. A translucent curtain was used as well as  a projector and see through curtain, as some plays had scenes depicted behind the curtain.  The actors’ costumes were simple, as the words  mostly depicted lives of modern ordinary women.