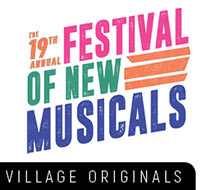 Village Theatre is excited to announce the lineup for The 19th Annual Festival of New Musicals, a series of five staged readings of musicals currently in development. The Festival will take place in Issaquah August 9-11, 2019. Village Theatre’s Festival of New Musicals is the birthplace of Tony and Pulitzer Prize-winning shows such as Next to Normal and Million Dollar Quartet, as well as Broadway and Off-Broadway hits: It Shoulda Been You, Desperate Measures, Lizzie, and many more.

Readings in this year’s Festival will include: XY, an uplifting musical about an intersex man navigating his first romantic relationship; Cold Turkey, a wild and funny satire about a small town in America that attempts to quit smoking and win $25 million; Modern, an inspiring tale about a group of Amish teenagers on their Rumspringa; Eastbound, an empowering and poignant story about Chinese brothers, separated at birth, who travel across the world in search of a home they’ve never known; and Cowboy Bob, an adventurous rock musical about a bank-robbing woman who evaded detection for more than a decade. “This year our shows really run the gamut from small chamber musicals to large scale musical satires,” says Associate Artistic Director, Brandon Ivie. “It’s a testament to these writers, the Seattle theatre community, and our audiences that we can support such a vastly varied group of new musicals.”

In addition to the five readings, this year’s Festival will include a new event, Quick Musicals. This will be a collaboration with The 14/48 Projects, which produces the wildly popular 14/48: The World’s Quickest Theatre Festival. Quick Musicals will feature three 10-minute musicals written in just 18 hours. A theme for the musicals, as well as the writers and actors who will be participating, will be chosen at random at 6PM on the night of Friday, August 9. The writing teams will then collaborate overnight to create a 10-minute musical, which will be learned by the actors the next morning. The project will conclude with a reading at noon on Saturday, August 10.

The Festival of New Musicals provides an essential platform for writers to incorporate a key component of live theatre – the audience. Each new musical will be rehearsed during the week, then presented in full to the audience in staged reading format. Many of these readings go on to be further developed in the Village Originals program as well as on the Mainstage. The readings are not open to the general public; however, those interested in being the first to see these new works may become Village Originals Members to gain access to The Festival and other exclusive benefits and events.