The Year of Magical Thinking- Enough Magic for a Year 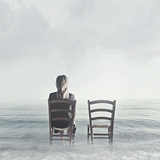 This is one show that REALLY deserved its standing ovation.

Quadruple bypass surgery is mentioned in this adaptation of Joan Didion’s memoir, The Year of Magical Thinking and it gave me the right adjective to describe the production. Quadruple Winner, because the script, the acting, the directing and the tech work, all were worthy of the title: Magical.

Published in 2005, the stage version, adapted by the author herself, opened on Broadway starring Vanessa Redgrave and directed by David Hare. The Year of Magical Thinking, is, in fact, a memoir about how Didion experienced the death and mourning period of her husband, while her only child, Quintana, was dangerously ill in a coma. The stage version adds material from the sequel Blue Nights, about Quintana’s subsequent death, not long after her husband’s.

Although the subject matter sounds depressing, and it brought not only tears to my eyes, but also powerful memories of my sister’s sudden death, when she was 39 and I was 36. However, the script was laced with wit, humor and what George Orwell would call “unnecessary details.” Indeed, it was in recounting the details of her husband’s death, which drew the audience in. Like many people functioning in shock and disbelief, after the sudden death of a partner or sibling, recounting these details, rather than raw emotion, rendered her a zombie, inhabiting a body, functioning but feeling somewhere else all the time.

Also these details effectively helped to both relieve and enhance the tragedy because there is nothing more tragic than how branded into memory the smallest detail is, when you hear of a sudden death.

Suzanne Bouchard, as Joan Didion, was more than up to the task to bring this incredibly challenging script to life. Her comic and dramatic timing was off the charts and frankly, I do not think a more difficult script has ever been written for any actor. Bouchard was able to keep up the pace for 90 minutes without an intermission, never flagging and always engaging the audience with ironic wit, sadness and the full range of human emotions.

Besides directing this superb actor in a horrendously difficult play, Victor Pappas wrote a heart-wrenching “Notes from Director Victor Pappas” in the program about his own experience with grief, which was almost as moving as the play. Pappas brought out the best in the script, as well as the actor, and chose a simple set by Catherine Cornel, which did not need to be changed according to the ever changing mood of the script. Instead, the technical team of Robert J. Aguilar and Lily McLeod, on the lights, as well as Sound designer Erin Bednarz, created simple unobtrusive but highly effective external mood changes, through lighting and sound, to enhance the internal mood changes of the actor.

“Magical Thinking” refers to an anthropological term, which describes the obsessive, irrational thinking humans use to come to terms with death. Catholics say,” if one is in a state of grace you will go to heave, but if you have a mortal sin on your soul at the time of death you will go to hell. Baptize a baby right away so it will go to heaven.” In some cultures, there are certain burial rituals so that souls do not roam forever. Etc. Anyone who has ever lost a loved one suddenly finds themselves obsessively thinking that maybe it was all a hoax, and the dead person will come back to their own funeral, like Tom Sawyer. Or that you can turn back the clock, or if you just do something, anything, the person will come back.

Joan Didion, recounts her own “magical thinking” during her mourning period. It is the best sort of entertainment because it is both tragic and humorous, while poignantly speaking about the most difficult thing any of us have to live through, the death of a spouse and child.

Get your tickets now, it was sold out on opening night.