Love and rebellion on display in Seattle Opera’s Carmen

Georges Bizet’s Carmen is one of the most prevalent operas in the canon with music that is practically inescapable even in the most modern of zeitgeists. It only takes the first few bars of the habanera “L’amour est un oiseau rebelle” to conjure up feelings of passion, love, and obsession. While Carmen is known primarily for the more devastating elements, no good tragedy is without its comedic moments. The current production onstage at Seattle Opera takes full advantage of the lighter, playful moments while contrasting those with much more grounded and realistic portrayals of the darker points than normally seen in a traditional staging. 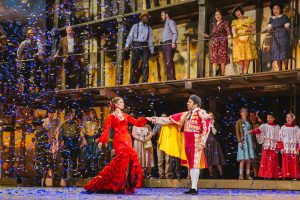 The opera begins with a burst of energy, color and general hustle and bustle. Children are playing, soldiers are lounging, and the women from the factory emerge for their break. Through the clamor appears Carmen and instantly all are under her thrall. All, that is, except for Don José which, of course, means that is the only person Carmen has in her sights. Eventually (and inevitably), he is swayed by the seductress and their tumultuous love affair begins. Don José is constantly pulled between the man he believes he should be – the one who follows his mother’s wishes, stays in line with his fellow military brothers, and marries the archetypal “good girl” Micaëla – and the life of freedom, adventure and excitement promised by Carmen. 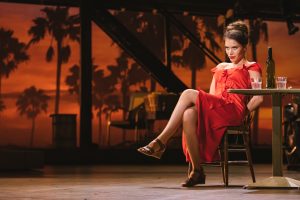 While there are many components that go into pulling off a successful production of Bizet’s masterpiece, it all hinges on the opera’s namesake and in Ginger Costa-Jackson (sung on alternate performances by Zanda Švēde) lies the consummate Carmen. From the moment she saunters onto the stage, she has the entire audience in the palm of her hand and at her mercy. Her voice is warm and captivating and Costa-Jackson utilizes all of it expertly from her powerful lower register to the floated diminuendos. She also does not rely solely on her magnificent instrument. Her physicality as Carmen is enthralling with every hip swivel and a castanet performance so steamy that would cause any person to abandon their platoon and turn to a life of crime.

In the role of the the tortured tenor Don José is Frederick Ballentine who stepped in at the last minute for an ill Scott Quinn (the role is sung on alternate performances by Adam Smith). Ballentine has an easy and  powerful tenor sound and while there may have been some awkward staging moments (understandable considering the mere two days of rehearsal) there was not a single emotional moment that felt false. As Don José’s maligned fiance, Micaëla Vanessa Goikoetxea (sung alternately by Emily Dorn) exudes innocence and wholesomeness. She looks like she could have appeared straight out of a production of Bye Bye Birdie and is the perfect contrast to the worldly and sensual Carmen. Rodion Pogossov channels equal parts Fonzie and Elvis for the toreador Escamillo. As Carmen’s girl group back-up singers are Madison Leonard (Frasquita) and Sarah Coit (Mercédès). They both play off of each other well and add some much needed levity to the rather bleak second act. 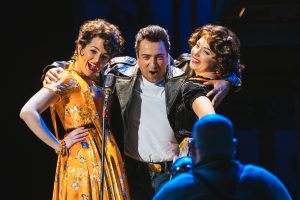 Thanks to the sets and costumes designed by Gary McCann and the lighting design by Paul Hackenmueller, this production is beautiful and exciting from start to finish. The 1950s aesthetic is used to a dazzling effect and makes for some clever moments with girl group choreography (courtesy of Associate Director and Choreographer Seth Hoff) and motorcycle entrances. The orchestra, under the baton of Giacomo Sagripanti is lively and dynamic. While all of these fantastic elements would be enough for a successful production of Carmen, they play devastatingly against the tragic moments of the opera. In particular, the fantastical parade in honor of the bullfighters is followed immediately by the very unflashy and incredibly disturbing confrontation between Carmen and Don José. 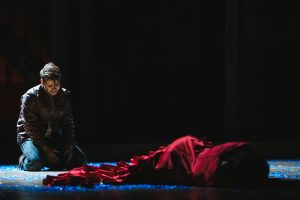 Carmen will be at Marion Oliver McCaw Hall through May 19, 2019. It is presented in French with English captions and is a co-production with the Irish National Opera and Opera Philadelphia. For tickets and more information, please visit https://www.seattleopera.org/