An emotional night at the Rep with Nina Simone: Four Women

In Nina Simone’s pivotal civil rights song “Mississippi Goddam,” she snidely states “This is a show tune but the show hasn’t been written for it yet.” Christina Ham has righted this obvious wrong and director Valerie Curtis-Newton along with an exquisite cast and stellar crew have created a heartbreaking, passionate, and (unfortunately) still incredibly timely piece currently rocking the stage at the Bagley Wright Theater.

Nina Simone: Four Women is named for the stirring song of the same title and is part biography and part jukebox musical while totally transcending both of these genres. The story unfolds over one day in 1963 in the 16th Street Baptist Church where the effects of the horrific bombing and the deaths of four young girls can still be seen, heard, and felt. As the riots rage just outside, Nina Simone is inside, amongst the rubble, trying to grapple with the tragedy in the best way she knows how – through music. As she struggles through the writing of the song that will eventually become “Mississippi Goddam,” she is visited by three women. Each one is an extension of the archetypes in Simone’s song Four Women.

While the framework of the show is based around true events, the play itself has much more of a fantastical feel. Each woman barrels onto the stage, eager to monologue expositorily about their respective lives, troubles, and opinions. While this could lead easily into a very long 1 hour and 45 minutes, the supremely talented cast makes every second feel grounded and real and by the end of the night, our hearts are tied tightly to each woman. 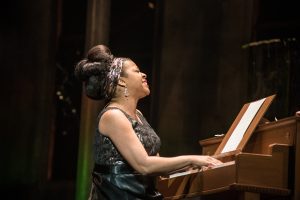 As the titular character of Nina, Shontina Vernon is stunning. From the opening moments, she is fully in control of not just the events onstage but the audience as well. Vernon exudes  confidence and poise so effortlessly that the times when the character of Nina is shaken, it is jarring and extremely effective. She is also able to completely and convincingly embody Nina Simone while never letting it turn into an impression. Shaunyce Omar takes on the role of Sarah, the domestic worker, who is just trying to make it to work and provide for her family while also struggling with the aftermath of the bombing. Omar brings an incredible strength and depth to the character as well as a rich alto voice that shakes you to your very core. As Sephronia, the staunch and steadfast activist, is Britney Nicole Simpson. She has the perfect balance of idealism and righteousness with an immense amount of pain simmering just below the surface. Simpson also has a truly singular voice that seems effortless and organic. Rounding out the quartet of powerhouses is Porscha Shaw as Sweet Thing. Though she has the least amount of stage time, she makes a strong impression very quickly. She is self-possessed and beholden to no one.

As any piece of art about Nina Simone should be, Four Women revolves around the power of music. Ham and Music Director/Composer Stephen Michael Newby have woven through this piece, an array of music from Simone’s original works, her covers, and traditional gospel songs. As Nina states within the play, “Where words fail, music doesn’t.” The musical interludes vary from big, performative, show stopping numbers to songs that are so intimate that we as audience members feel like intruders.

When revisiting the dark moments in our nation’s history, we hope that it can feel wholly of the past. Unfortunately, the arc bending toward justice is much longer than it should be and much of the pain and heartbreak brought to bear in this snapshot of 1963 feels all too relevant. As Ms Simone says “TOO SLOW!” In the end, though, there is hope. There were people fighting for justice then, and there are those fighting now. There is a display in the the lobby where the  audience members are asked to name black women who are making a difference in their community. A similar visual of influential black women of the past and present is employed in the rousing and inspiring finale.

Nina Simone: Four Women is presented by Seattle Rep. It will be playing in the Bagley Wright Theater through June 2nd. For tickets and more information, please visit https://www.seattlerep.org/