A successful stage farce is much harder than it looks. What appears to be “running amok,” is actually a choreographed dance. What appears to be chaos is actually coordinated to the split second. Centerstage Theatre opened a wonderful farce this weekend, with their production of “The Musical Comedy Murders of 1940.” It is a show ranked among the best of the genre from one of the area’s really fine houses.

Writing about “The Musical Comedy Murders of 1940” is also harder than it would appear. If Drama in the Hood tells you what we know, part of the fun will be spoiled. Because, how the cast introduces itself may not be who they turn out to be at the end. Or, are they? It’s all very mysterious.

There are a number of writers/publications in the area that give out end-of-season awards. Broadway World is one, and South Sound Stage Excellence is another. Truly, if an award were to be given for the art of fainting, Colleen Michelle Bjustrom’s “Bernice” would carry it away…until she fell down again. Collapsing at a moment’s notice, Ms Bjustrom’s performance in this show was a delight. Her single-mindedness to the task at hand, regardless of the mayhem around her tickled our funny bone and made her a standout.

Noel Pederson’s “Nikki” is another outstanding performance in The Musical Comedy Murders of 1940.” Her comedy timing was impeccable and her scenes with Brad Walker’s Eddie McCuen (another of the many fine performances in this show) were particularly well-played. This is Ms. Crandall’s Centerstage debut and it is a strong one.

Colin Briskey is a veteran of many South Sound musical productions, but gets to put aside music (save for some piano work) in this show. As in the case of Ms. Pederson, Mr. Briskey’s comedy timing stands out. He mastered the 1940-esque quick dialogue patter and could have been effective in any number of comedy classics from back in the day. His “Roger” interacts with the other actors, but keeps its base conceit intact, ready to bristle at any perceived slight about his talent. That’s the kind of continuity that Director Angela Bayler needed from Colin Briskey and he came through beautifully.

Pat Sibley’s played “Helsa” with great gusto. “The Musical Comedy Murders of 1940” is not about deep subtlety and Ms. Sibley brought the goods to her role. It was a masterful, and highly- entertaining, performance.

A sometimes overlooked skill in a show such as this one is stage combat. Besides being really good as Patrick O’Reilly, Timothy Duval and Pat Sibley brawl in a convincing fashion. Good, strong work throughout from these two.

Jacob Tice is a critical favorite in the South Sound and he did not disappoint as “Ken De La Maize” in this show. Dropping names as fast as they can fall from his lips, Mr. Tice owns it. There are two repeating themes in the role and Mr. Tice makes them each fresh no matter how many times they come up. That’s not easy to do, but Jacob Tice is more than up to the job.

G. Kent Taylor is “Michael Kelly” in this show. A veteran presence, Mr. Kelly plays his role (roles?) with great skill. He brings a great deal of experience in a great many types of shows and genres to bear, and this show is all the better for his participation. 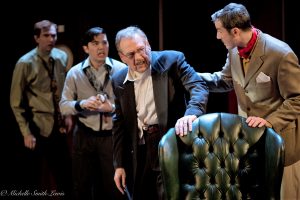 “Marjorie Baverstock’s” time on stage is cut short by back pain. But, Eloisa Cardona is truly divine (or a word to that effect) in the part. This is Ms. Cardona’s Centerstage debut, and she’s welcome to return at any time. She does a very nice job in “The Musical Comedy Murders of 1940.”

Finally, one of the show’s really fine performances is by Arwen Dewey as Elsa Von Grossenknueton, who hosts the get-together with a delightful ditziness and an eye on what the next food course might be. Ms. Grossenknueton plays the whole murder mystery as if it is a board game with life-sized pieces. Her delight is contagious, and Ms. Dewey’s performance is one of the must-sees of this show. Just watching her enter and exit a room made us smile.

Let’s face it, real-life is a drag right now, so we watch the news with a finger poised over the remote, ready to switch to Nickelodeon to escape it all. Drama in the Hood has a better idea. Get in touch with the good folks at Centerstage Theatre and secure a ticket to “The Musical Comedy Murders of 1940.” This cast is a treat to see in action, the people in charge are great, the drinks are tasty and the lovely theater is simply “divoon.” What more could you ask?