Andrew Lloyd Webber is a musical treasure. Among his many works of note are “Cats,” “The Phantom of the Opera,” “Joseph and the Technicolor Dreamcoat,” “Sunset Boulevard,” and many more. The shows he created are in high demand, snapped up as soon as they become available. Unfortunately, some of his show are not available to community theatre groups, at least in their entirety. Enter, the musical revue opened this weekend at Tacoma Musical Playhouse. It is a show punctuated by style and grace, befitting the professional stature of a man so honored and deserving.

“How did they do?” That’s the cut to the chase question, after all. Drama in the Hood answers, “Very well, with moments of true brilliance.”

Split into two acts with a 15-minute intermission, the show opens with two numbers from Cats. Diane Bozzo’s rendition of “Memory” was the best part of this set. Ms. Bozzo would return later for another excellent turn in “With One Look,” from “Sunset Boulevard.”

Jonathan Bill and Brandon Hell combined next in “Unexpected Song,” from “Song and Dance.” It was good, but both men would be better in later turns on stage. Brandon Hell showed off his considerable vocal abilities in “Close Every Door,” from Joseph and the Technicolor Dreamcoat,” while Jonathan Bill was at his best in “The Phantom of the Opera.”

“I have never heard her better.” That was one audience member’s response to Allyson Jacobs-Lake’s excellent rendition of “I Don’t Know How to Love Him,” from Jesus Christ Superstar. Indeed, Ms. Jacobs-Lake was more than up to the task of portraying a Mary Magdelene who was by turns winsome, confused, and defiant.

Three numbers from “Evita” were next. Mauro Bozzo’s theatrical “Oh What a Circus” was an interesting and entertaining counterpoint to Rafe Wadleigh’s performance as “Che” on this stage a couple of years ago. Mr. Wadleigh brooded, but Mr. Bozzo pranced. Which was the better performance? That would be a matter of opinion, but Mauro Bozzo never fails to put on an outstanding performance.

After intermission, the curtain went up on Act Two, and “Welcome to the South Sound Biffy Binkley.” Where have you been all our lives? 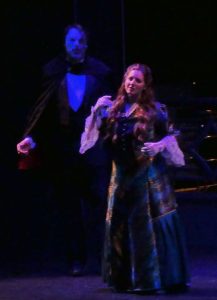 Jonathan Bill and Biffy Binkley, performing “Phantom of the Opera in TMP’s “The Music of Andrew Lloyd Webber.” Photos by Kat Dollarhide.

Saving Biffy Binkley for the second act was an act of showmanship by show director and co-choreographer Jon Douglas Rake. From the moment she took the stage to combine with Jonathan Bill on “Phantom,” she owned the rest of the night. She began with a rich and tuneful alto and quickly showed that she has a vocal range to the moon and back again! “Phantom,” “Think of Me” “Wishing You Were Somewhere Here Again,” Bravo, and Bravissimo, from an audience in her delicate hands, overwhelmed by the power and presence of her vocal acumen. Ms. Binkley took a great night of music and turned it into a transcendent and magical evening.

Is there anything about the show that will improve with age? A couple of areas might. Jonathan Bill and Brandon Hell will combine more cleanly on “Unexpected Song,” and the company will gain greater cohesion on the show finale. Some of them seemed to be searching a bit for the next lyrics.

Almost exactly a year ago, Tacoma Musical Playhouse staged “My Way,” a Frank Sinatra retrospective. In that show and in this show, the benefits of a live band were most keenly felt. On this night, Conductor Jeffrey Stvrtecky got the best out of his seasoned and excellent musicians. Keyboardists Dean Story and Addison Daniels were particularly outstanding.

The choreography for the Andrew Lloyd Webber revue by Jon Douglas Rake and co-choreographer Madison Wingerter-Ripley was outstanding. Not everyone can choreograph “Starlight Express” and make the skaters look like they were born on wheels. Ms. Wingerter-Ripley was the Dance Captain and the best dancer on stage. She wore Costume Designer Janet English’s shimmery black, white, and silver dress to perfection, as well.

Occasionally, theater-goers are hesitant about shows such as The Music of Andrew Lloyd Webber. They shouldn’t be, at least in this case. Some of the best songs are sung by the best the South Sound has to offer. So, get out of the cold night and into some hot music. Because, the winter was made for shows like this one.